Book Review: Letters to a Young Brother: Manifest Your Destiny 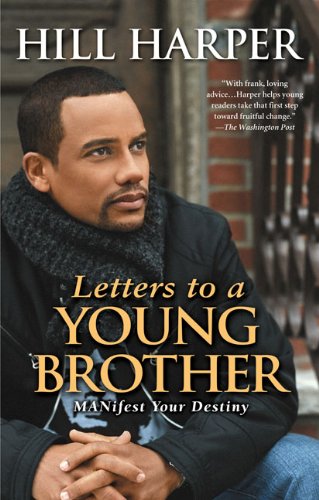 Read a Description of Letters to a Young Brother: Manifest Your Destiny

"Young men today have been bombarded with images of wealth and success that tell them that buying the hottest car or the most bling-blingin’ jewelry is what they should be motivated by. There is an overwhelming sales pitch targeted at these young men that subliminally suggests that material goods are what makes them real men. I want young men to have knowledge of the things that bring them true empowerment: education, a strong sense of purpose, compassion, confidence, and humility, to name a few.

I am living proof that these principles work. Through the letters in this book, I wish to pass on to other young men my grandfathers’ legacies of education, hard work, determination, and success."
—Excerpted from the Introduction

Lately, it seems that everyday another study is announced sharing some sobering statistics about the dire straits of the African-American male. Whether it has to do with employment, parenting, education, incarceration, or any other factors correlated with success in this society, all indications are that the black male is currently in crisis.

For this reason, Hill Harper, star of CBS-TV’s CSI: NY, was inspired to publish Letters to a Young Brother. Many might wonder what a famous actor living in la-la land might have to offer kids trying to survive the rigors of the real world. Well, many might not know that he’s also a Harvard-trained attorney with three Ivy League degrees.

Hill credits the support of his family when his it comes to all his considerable achievements, pointing out that the presence of role models every step of the way of his development was critical. And because so many black boys have absentee fathers, this book is structured as a series of questions posed by an at-risk adolescent and answered by the author in his capacity as a mentor with plenty of pearls of wisdom to share.

The prevailing message delivered by Letters to a Young Brother is that education is power, that material possessions do not ensure happiness, and the importance of being the architect of your own life. A priceless, no-nonsense, step-by-step guide out of the ghetto, provided it reaches a pair of receptive ears with a support team prepared to help him achieve his dream.

AALBC.com Review of Harper’s Letters to a Young Sister: DeFINE Your Destiny
http://aalbc.com/reviews/letters_to_a_young_sister.htm

Read Avery’s description of Letters to a Young Brother: Manifest Your Destiny.