Book Review: Letters to a Young Sister: DeFINE Your Destiny 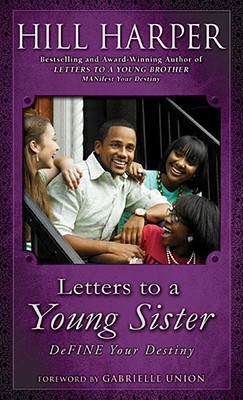 Read a Description of Letters to a Young Sister: DeFINE Your Destiny

’In Letters to a Young Sister, Hill has covered all the important issues. As a woman, I can't agree more with how important it is to focus on becoming your best self, a point Hill makes several times in this book. That means focusing on individual accomplishments and doing the things that help you become a whole person...

Part of the reason I like having a friend like Hill is because during a time when my goals are constantly changing, he helps me find clarity... He wants to make sure I always do my best and challenge myself. He constantly reminds me that I am worthy and deserving of the best. There truly are good ’brothas' out there, and Hill is one of the best. I hope you enjoy the book.’  ’Excerpted from the Foreword by Gabrielle Union (pages xvi-xvii)

Attorney-turned-actor Hill Harper received nothing but positive feedback a couple of years ago after the release of Letters to a Young Brother, his inspirational how-to book aimed at African-American males. Its uplifting message emphasized the value of a good education over the accumulation of material possessions while also stressing the importance of being the architect of your own life.

Still, everywhere he went, Hill was surprised at how many women approached him about an opus offering similar sensible advice for their daughters, so it was only fitting that he would choose to write a companion text entitled Letters to a Young Sister. With the help of a host of celebrities from all walks of life, such as Angela Bassett, Michelle Obama, Ruby Dee, Congresswoman Carolyn Cheeks Kilpatrick, Nikki Giovanni, Sanaa Lathan, Bishop Noel Jones, Dr. S. Elizabeth Ford, Nia Long, Tatyana Ali, Lauren London and business executive Cathy Hughes, he addresses a litany of concerns occupying the inquiring minds of impressionable black females in their formative years.

The subjects touched upon range from boys to morals to self-esteem to sexuality to academics to faith to racism to reputation to sexism to fathers to misogyny and beyond. To give you a taste of what to expect, here's an excerpt of how Michelle Obama responds to an A-student who says she's being teased for getting good grades.

’I was once in your shoes... Neither of my parents went to college, and I never knew college or Ivy League universities were an option for me’ Because of how hard I worked and the grades I made, I was ready for anything ’ ready for Princeton, and next Harvard Law ’ ready to move home to Chicago to give back to my community’ Ready to be a strong woman and raise two strong daughters. And ready to be the First Lady of the United States, if that's what the future holds for me.

So I encourage you, young sister, to stay smart and thoughtful and creative’ Keep reading and learning and sharing your thoughts and ideas. Own who you are and be proud of you. I am.’

Overall, an uplifting collection of sage insights aimed at instilling black girls with self-confidence, self-respect and self-reliance while imploring them to dream big every step of the way to becoming a fulfilled and successful woman.

AALBC.com Review of Harper's Letters to a Young Brother: Manifest Your Destiny
http://aalbc.com/reviews/letters_young_brother.htm

Read Gotham’s description of Letters to a Young Sister: DeFINE Your Destiny.