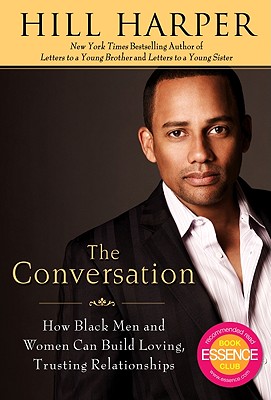 Read a Description of The Conversation: How Black Men And Women Can Build Loving, Trusting Relationships

’One of the things I've heard a lot from young brothers and sisters during my recent travels is ’I want a woman like Michelle’ or ’Why can't I meet a together brother like Barack?’ In truth, they might be that person every day. These young people are seeing the finished product, the result of years and years of work and struggle’

I jokingly remind sisters that when Michelle met Barack, the car he was driving around in had a hole in the floor of the passenger's side so big that you could see the street’ People tend to look for status in a mate when they should be looking for potential’ and that means looking beyond the external.’
’Excerpted from Chapter 9 (pages 103-104)

After winning NAACP Image Awards for his best-selling children's books ’Letters to a Young Brother’ and ’Letters to a Young Sister,’ Hill Harper decided to write one for adults. The Conversation: How Black Men and Women Can Build Loving, Trusting Relationships does dole out plenty of practical love advice, even though the author's never been married and freely admits to a checkered past in terms of dating.

Half how-to tome, half intimate memoir, The Conversation is divided between the battle-of-the-sexes and Harper's frustration at his own failure to find a life mate. The latter aspect of the text proves more compelling than trite, ubiquitous maxims like ’Let your feelings show’ and ’Think outside the box,’ since Hill eventually falls for Nichole, a single-mom from D.C. he first met years ago at a friend's wedding.

In this ill-conceived opus, however, he makes the tactical error of going public with his feelings, announcing to the world that ’This beautiful Black queen is my great blessing here on earth.’ And in his concluding chapter, he waxes romantic about their solid future together, despite the odds against long-distance liaisons when one person's on the East Coast while the other lives out in L.A.

Regrettably, the couple has reportedly already called it quits, which makes you wonder why Hill's editors didn't try to talk him out of mixing business and pleasure on the pages of his book, especially given his spotty track record. Sorry, it's kind of hard to take any advice from a bachelor-turned-relationship guru who didn't see this safe falling from the sky or at least have the common sense to keep his private life private.

Read Knopf’s description of The Conversation: How Black Men And Women Can Build Loving, Trusting Relationships.