Book Review: Take Back Your Family: How To Raise Respectful And Loving Kids In A Dysfunctional World 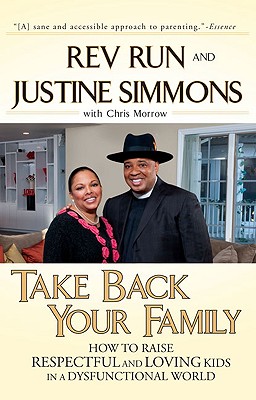 Read a Description of Take Back Your Family: How To Raise Respectful And Loving Kids In A Dysfunctional World

You can take back your family from whatever or whoever has gotten too much control over it. And when you are finally back in the driver's seat, and God’ is your navigator, there's no limit to how far your family can go, and how much fun you can have along the way!’’

’Excerpted from the Introduction (pages 18-19)

Before he was Reverend Run, Joseph Simmons was better known as the rap star Run of Run-DMC. But after the murder of fellow group member Jam-Master Jay in 2002, he became Born Again and studied to become an ordained minister.

A few years later, Rev Run and his second wife, Justine, first allowed MTV into their home in Saddle River, NJ to shoot a wholesome reality series revolving around them and their six children.

That hit show, Run's House, cuts a sharp contrast to those slumming shows which delight in exploiting the ignorance of trashy folks obviously plagued by some serious dysfunction. Fortunately, the Simmons' formula has worked in terms of television ratings, as they will start taping their 7th season in October, an indication that audiences are eager to see the day-to-day life of a sane and respectable Cosby Show-type family.

In Take Back Your Family: How to Raise Respectful and Loving Kids in a Dysfunctional World, Rev Run and Justine have reduced their tough love child-rearing philosophy into a handy tome designed to help anyone who might feel overwhelmed by their responsibility as parents. Laced with entertaining personal anecdotes and asides, the book proves to be as entertaining as it is enlightening.

The couple's no-nonsense philosophy basically calls for you to be your children's #1 role model and to lead by example in order to prevent the media, the street or other bad influences from shaping your kids. They also believe that you can't correct what you don't confront, so they say it is imperative that you have rules, be involved, and not behave like an ostrich when you have hints of serious issues simmering under the surface.

A sensible primer on pro-active parenting which puts an appropriate emphasis on cultivating core values, discipline and faith in these troubled times when impressionable young minds can be so easily seduced by the culture's shallow materialism.

Read Knopf’s description of Take Back Your Family: How To Raise Respectful And Loving Kids In A Dysfunctional World.