Book Review: I Beat The Odds: From Homelessness, To The Blind Side, And Beyond 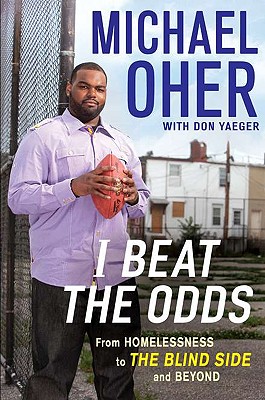 Read a Description of I Beat The Odds: From Homelessness, To The Blind Side, And Beyond

"I didn't write this book just to revisit The Blind Side… I want to help separate fact from fiction. After the movie came out, there were a lot of people asking me if my life was exactly how it was shown on screen.

Obviously, the moviemakers have to make artistic choices to tell the story…but some of the details… just aren't true. I hope that I can help to make a little more sense of it all.

My second goal with this book, and the much more important one, is that I want to talk about—and to—the nearly 500,000 children in America… in foster care. Many people probably know my name from The Blind Side... What no one knows is exactly what happened to me during my years in the foster care system, the years before The Blind Side picked up my story.

The ending of my story is unique, but the beginning of my story is, sadly, far too common…It is my goal with this book not only to tell my story in my own words, but to encourage anyone who is a part of the system or who wants to be a part of helping children out of it."
— Excerpted from the Introduction (pgs. xiii-xviii)

Michael Oher became famous a year ago when his inspirational story was made into a heartwarming Hollywood movie. That overcoming-the-odds sports saga recounted how a traumatized, black teenager went from homeless to National Football League star with the help of the a well-to-do family who rescued him from the streets of Memphis. Sandra Bullock even won an Oscar for her endearing portrayal of matriarch Leigh Anne Tuohy, a compassionate Christian who altruistically invited the gentle giant to move into her house.

But the film also took some liberties with the facts, such as suggesting that Michael only learned to play football in high school and that he was walking around wearing shorts in the middle of a frigid day in November. Furthermore, because the picture basically began with his rescue, it failed to convey exactly how much of a harrowing nightmare his childhood had been previously, when he and his siblings had been shuttled from foster home to foster home on account of their mother's crack addiction.

For these reasons Michael decided to write I Beat the Odds: From Homelessness to "The Blind Side" and Beyond, a poignant memoir from the perspective of an intrepid survivor who is not too proud to admit how scared, trapped and helpless he felt before finally finding a way out of the cycle of poverty. Given his humblest of origins, it's nothing short of remarkable that he now plays offensive tackle for the Baltimore Colts, a tribute not only to the intervention of the Tuohys, but to his own amalgam of ambition, dedication and persistence.

Besides relating his personal tale of courage, Michael designed his autobiography to serve as a charitable organization guide for folks motivated to get involved, as well as a how-to primer for children presently stuck in the foster care system. Along the way, he shares some practical advice with kids about the importance of finding role models, daring to dream, setting goals and developing a good work ethic.

In the process, Michael Oher drives home his salient point that "You don't have to get adopted by a rich family to make it." Thereby, his elusive, sugarcoated Hollywood fantasy is augmented by the more readily-accessible reality that "You just have to have it set in your brain that you are going to make a better life for yourself and you have to be committed to making that happen."


Read Knopf’s description of I Beat The Odds: From Homelessness, To The Blind Side, And Beyond.