Book Review: Do Me Twice: My Life After Islam 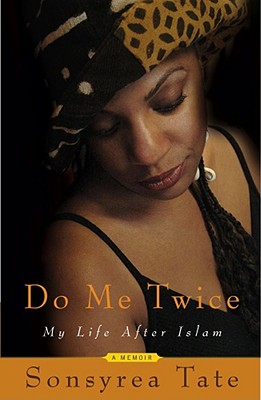 Read a Description of Do Me Twice: My Life After Islam

"The story I must tell in order to be transformed is the story of my coming out -- out of Islam, out of my parents' house, out of traditional choices, out of conventional thinking ’ in a way, out of my mind’ This is a story I need to tell as much as the world suddenly needs to know more about Muslim women behind the veil’ I began questioning Islam by the time I was twelve, and by the time I was twenty-one I was sure Islam was not for me. My transformation out of Islam coincided with my coming of age as an African-American woman, and the story of that transition is a story I feel compelled to share’ I need to tell the story that shows I'm no forsaken sinner because I turned from Islam. Thank God in America, so called apostates aren’t executed or imprisoned as they are in some Muslim countries. But for years I was afraid Allah would reach down from heaven and strike me dead for leaving Islam."
’Excerpted from the Introduction (pages 1-3)

Until the age of 18, Sonsyrea "Ray-Ray" Tate was essentially raised in the Nation of Islam, although the Black Muslim sect would change its name and philosophy several times over that time span. This could prove to be very confusing for a child who first had it ingrained in her head that all white people were devils, before being taught that they’re not devils, and then, oops, they are in fact devils after all. Her mandated clothing and spiritual rituals also underwent revisions intermittently, which might understandably take a toll when one is expected to follow a flip-flopping path on faith alone.

But apparently far more damaging than the dogma was the hypocrisy young Ray-Ray witnessed in her family members and others whose behavior bore little resemblance to what was dictated by the Koran. For example, her father got arrested, did drugs and wasn't much of a provider.

Furthermore, he failed to protect his daughter at a critical stage in her development, instead allowing her to date and ultimately marry an ex-con who had converted to Islam behind bars.

There's a saying, "The convert tends immediately to revert,"

and this is precisely what Sonsyrea discovered in her louse of a spouse, Ronald Bates. Like a typical teenage girl, against her better judgment, she initially found herself attracted to this bad-boy who not only had robbery and attempted murder on his rap sheet but already had fathered a child with another woman.

The problem was that as a Muslim female, Ray-Ray had been trained to be deferential, and that, at 18, she ended up marrying this loser who didn't even have a job. And by the time she finally wised up and dumped him she was also totally disillusioned with her religion. Making a break from her hubby and everything familiar, Sonsyrea struck out on her own, putting herself through college and landing a job at the Washington Post.

Meanwhile, she simultaneously began acting out rebelliously, smoking weed and indulging indiscriminately in recreational sex, as if belatedly making up for time frittered away under veils and long dresses during the repressive days of her lost youth. Ultimately, however, she did get her act together, and is now happily remarried and the editor-in chief of the Washington Informer.

This is the engaging arc of Do Me Twice: My Life after Islam, as revealing a memoir as you're ever going to get from a sister who's abandoned the Nation of Islam. What makes talented Ms. Tate's warts-and-all autobiography so riveting is that she's both a gifted writer and willing to be brutally honest in revisiting a rough life marked by perhaps more downs than ups.

Whether discussing her doubts about Islam, her resentment of Muslim women's second-class status, losing her virginity, getting high, visiting a male strip club, having a lustful liaison with a stranger, being raped by her first husband, visiting him in jail or learning that his mistress is nine-months pregnant, the author is always in touch with her feelings and unafraid to recount her rawest emotions with the reader.

All the fixins for a poignant page-turner.

Read Strebor Books’s description of Do Me Twice: My Life After Islam.