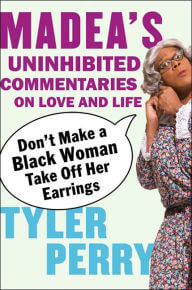 Read a Description of Don’t Make a Black Woman Take Off Her Earrings: Madea’s Uninhibited Commentaries on Love and Life


"Whoever came up with the saying that ’it takes a village to raise a child’ must have been thinking about my friend Madea. In the black community, Madea was the head of that village. Her name is the southern term for ’Mother Dear.’

Madea used to be on every corner in every neighborhood when I was growing up and generations before. If somebody's child was doing something wrong, Madea got to them and straightened them out or she would go directly to the parents, and the parents straightened the kids out.

She used to be everywhere, but today she is missed. Back around the 1970s, the Madeas began to disappear and they have left an unmistakable void. I want to dedicate the spirit and intent of this book to all the Madeas and mothers that I grew up with.’
’Excerpted from the Foreword

Tyler Perry has become both a screen and stage phenomenon starring in Diary of a Mad Black Woman and Madea's Family Reunion as Mabel ’Madea’ Simmons, the sassy, pistol-packing senior citizen and self-appointed guardian of the black community. Besides appearing in drag, the multi-talented Perry also writes, directs and produces his own work.

Now we can add best-selling author to his long list of credits, as his advice book, Don't Make a Black Woman Take Off Her Earrings: Madea's Uninhibited Commentaries on Love and Life is already sitting in the #1 spot on the New York Times best selling list. However, this text is not intended to be taken at face value, for its content is more of a humorous than serious nature.

For these frequently politically-incorrect words of wisdom come courtesy not of Perry but through the mouth of his famous fictional character. And Madea is not one to think before she speaks.

We learn that Madea has some skeletons in her closet and that she was a single-mom and worked as a stripper to support her daughter. She also shares that she was opposed to Rosa Parks call for a bus boycott to end segregated seating because, ’I was too big to be walking all that around.’

It's unfortunate that someone being touted as a role model would have so many negative traits, even if it's all just a joke. As for attracting a man, she tells women to, ’put on your shortest dress and your longest hair.’

Madea also observes the difference between the way blacks and whites dance. ’If you really want to bust your gut laughing,’ she says, ’watch white people dance to black music.’ As for African-Americans, ’We have rhythm. I'm talking about real dancing that comes through us, takes us back to Africa, where you have the stripes across your face’ your breasts painted and nose pierced.’

The best explanation I can come up with for such cringe-inducing comments is that Madea credits someone named Joel Brokaw with transposing her audio tapes into the final manuscript. Let's give her the benefit of the doubt and assume that a lot got lost in the translation by her ghostwriter. I'm sure that the very successful Tyler Perry has plenty of priceless insights which might prove valuable to impressionable young minds, and pray that they make it into his next opus.