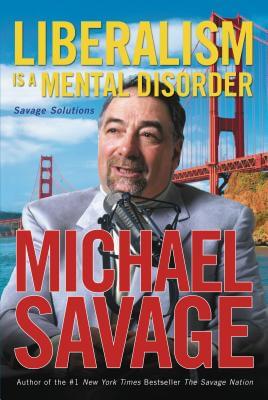 Read a Description of Liberalism is a Mental Disorder: Savage Solutions

"The single biggest threat facing America is the rise of Islamofascism in this country. While the throat-cutters in dirty nightshirts beheaded Americans... clueless educators encouraged tolerance for Muslims precisely at the same time many imams from the religion of peace were assailing American infidels. Insanity!"

It is terribly worrisome when a book like Liberalism Is a Mental Disorder lands in the Top Ten on the New York Times' Best Seller List. The problem lies not with the fact that its author, syndicated radio talk show host Michael Savage, is an arch-conservative, but rather that he passes off his paranoid brand of intolerance as if a patriotic duty.

His style reminds me very much of both Rush Limbaugh and Ann Coulter, a couple of other conservatives given more to superficial sloganeering than any sort of intelligent discussion of issues. Here, Savage sets his sights on everyone from gays to illegal immigrants to the ACLU to feminists,

But he reserves his most virulent attacks for Islam, questioning not only the legitimacy of the prophet Muhammad and the Koran, but the essential underpinnings of the religion. Muslims ought to be more upset by this damning text than by whether an FBI interrogator flushed the Koran down the toilet.

According to Savage, Muhammad was a pedophile whose youngest wives were six and nine year-olds. He also says that there are two versions of the Koran, a hard-core one in Arabic and a watered-down one in English.

He argues that although deluded liberals believe otherwise, "Islam, by definition, has zero tolerance for those with non-conforming views." He goes on to claim that ’radical Islam isn't a religion as much as it is a political movement with global aspirations," namely, to convert or to kill all infidels.

Perhaps his most preposterous allegation is that, "Every single major terrorist attack against the United States has been committed by radical Muslims." What about the Oklahoma bombing, Pearl Harbor, or slave revolts led by Nat Turner, John Brown and others?. When an author bases his rationale for hate on so many factually incorrect assertions, he doesn't even deserve to have his nonsense dignified by contravening critical comment.

Strictly for fans of Martian invasion and Holocaust hoax literature.