Book Review: To The Mountaintop: My Journey Through The Civil Rights Movement (New York Times) 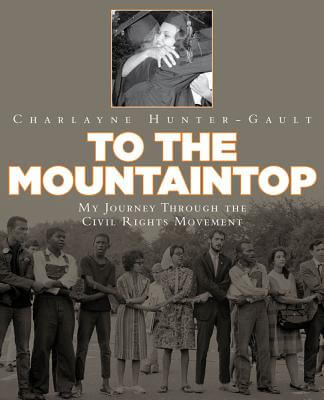 Read a Description of To The Mountaintop: My Journey Through The Civil Rights Movement (New York Times)

“On January 20, 2009, 1.8 million people crowded onto the cold, hard grounds of the nation’s capitol in Washington, D.C. to witness the swearing in of the first black president of the United States of America… My husband, Ronald, and I had flown 16 hours from our home in Johannesburg, South Africa…

For me, it was the climax of an even longer journey, one that I had begun with thousands of others back in… the Civil Rights Movement. The inauguration was another milestone on the long walk to freedom from unjust laws and their consequences…

On the campaign trail in Selma, Alabama… Barack Obama [said], "I'm here because somebody marched for our freedom… I stand on the shoulders of giants."

Charlayne Hunter-Gault is an accomplished reporter who, over the course of an enviable career, has won a couple of Emmys, a Peabody Award and been named the Journalist of the Year by the National Association of Black Journalists. While many might recognize her as a veteran television news correspondent from her stints at CNN, PBS and NPR or as a writer whose pieces have been published by the New Yorker and the New York Times, most folks are probably unaware of her critical contribution to the dismantling of the Jim Crow system of segregation during the Civil Rights Era.

In 1961, one of the bloodiest years in the integration movement, she and a classmate, the late Hamilton Holmes, became the first African-Americans admitted to the University of Georgia when the NAACP won a lawsuit filed on their behalf. A few days later, accompanied by their parents and attorney Vernon Jordan, the pair negotiated their way to the school’s registrar’s office through a menacing gauntlet of raucous whites shouting racial epithets.

Although the two new students had good reason for fear and trepidation about being left alone on a hostile campus in the heart of Klu Klux Klan country, they never let the intimidation get the better of them and went on to graduate from the college. To the Mountaintop: My Journey through the Civil Rights Movement is a moving memoir which eloquently recounts their historic achievement in glowing detail.

This fascinating autobiography covers a half-dozen pivotal years in Charlayne’s life, the period from 1959 to 1965. Besides intimately recounting her personal experiences during that difficult period, the author also covers what other activists were simultaneously doing elsewhere around the country in the quest for equality, whether participating in sit-ins, freedom rides or attending the March on Washington.

The book is written in a user-friendly style designed to engage readers 12 and over, and arrives illustrated by a cornucopia of iconic black-and-white photos and newspaper reprints. Kudos to Ms. Hunter-Gault for crafting such a poignant, very personal reminder of just how hard-fought was the struggle which ultimately led to the triumphant election of our first African-American president.

Read Flash Point’s description of To The Mountaintop: My Journey Through The Civil Rights Movement (New York Times).