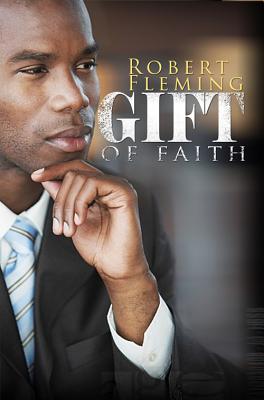 Read a Description of Gift Of Faith

The idea of faith, is a common reference for most of us and yet it is an idea that many of us have not had the experience to really know its meaning intimately. In Robert Fleming’s new novel, Gift Of Faith, Rev. Clint Winwood not only has his faith severely challenged as an up-and-coming junior pastor of his church but has his belief in his very manhood up for examination.

Fleming stacks the odds against the young, handsome African American minister at the novel’s outset. He’s a graduate of an Ivy League theological seminary with the gorgeous family with two young children and a very attractive wife. The reader meets him sadly when he’s taking public transportation, being jostled for a seat and woozy from sedative medication because he is no longer able to drive. Weeks earlier, his seemingly perfect life has been utterly leveled with the unthinkable act of his wife murdering his children and killing herself.

Gift of Faith is a virtual tour-de-force of page turning. It has a take-away quality, not so much as a lesson or as a parable, but as the reader actually walked in another’s shoes. Of course, we are pulling for the young pastor to emerge as the victor as soon as possible, because, well, it’s painful for us to experience the bitter truth of bad things happening to good people. However, Fleming’s take on Clint Winwood is more balanced and realistic. The minister can be his own worst enemy at times, because he’s confused about coming to terms with his own shortcomings that indirectly contributed to his terrible tragedy.

Most importantly, there are several areas of this story that resonate so accurately about the crucial issues of the current black urban church. There’s a wonderful organic quality regarding this novel’s narrative structure as it reveals the main character’s evolution. For instance, in the pastor’s struggle to stay sane, to retain his faith and keep his self-loathing at bay, he manages to address serious issues presented to him from those trapped in poverty and neglect.

Fleming even manages to infuse a bit of humor in one scene where he has gathered a group of at-risk teens:

“Do you know what Henry McNeal Turner or Richard Allen accomplished in our history?” I asked the teens.

One of them yelled. “Allen plays point guard for the Celtics. I know him. Good three-point shooter.”

This novel raises some conflicting concerns about the nature of faith in our daily lives, while it provides a brief but intimate peep inside the urban black church. In Gift Of Faith, the church is certainly not without its corruptions and venal leadership, as with any secular entity, but it also consists of truly dedicated individuals who struggle mightily with personal, moral, and social issues.

In this regard, Gift Of Faith sends a strong signal that not only is God not dead, but the black church is just getting its second wind as a carrier of the torch of light and truth in this age of quickening darkness.