Book Review: Life As A Single Mom: It Isn’t Easy, Or Is It? 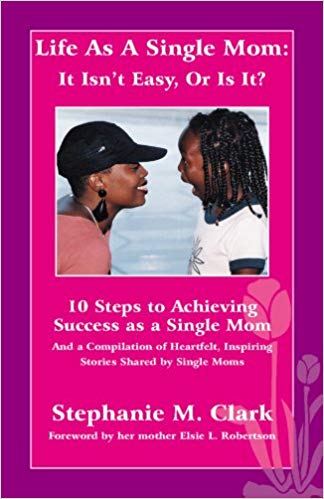 Read a Description of Life As A Single Mom: It Isn’t Easy, Or Is It?

’’Being a single mom isn't easy,’ is something I hear constantly over and over throughout my travels, and I mostly hear it from people who are not single moms. It sometimes feels like they pity me and other single moms.

It is not that I haven't gone through trials and tribulations. But’ my struggles have never really been the result of being a single mom, but rather, choices I have made as a woman. This is why I have written this book. I want to empower single moms by giving them the tools to become fulfilled single women. And I want to enlighten people who tend to pity single moms.’
’Excerpted from the Introduction (pages 2-3)

According to the latest statistics, over 70% of all black children are born out of wedlock and about 80% will spend most of their childhood without a father figure in the house. This means that most of the child-raising in the African-American community will continue for the foreseeable future to fall on the shoulders of the black woman.

For this reason, a book like Life as a Single Mom is arriving at an optimal moment in history, given that it was written by a seasoned single mom of 15 years. Stephanie Clark is also the founder of My Daughter's Keeper, a non-profit organization created ’to provide support and resources to mothers/caregivers and daughters (ages 8-19).’

Not only is Ms. Clark a single mom herself, but she was the youngest of 13 kids raised by a single mother. Part of the author's purpose in writing this valuable how-to handbook is to help the next generation end the self-destructive cycle of babies making babies which has ensnared many a family for as long as any of its members can remember.

Besides sharing her own and her mom's personal tales of survival, Clark calls upon dozen of friends, colleagues and acquaintances to relate their case histories in a free flowing anecdotal fashion. What the women appear to have in common is that rather than seeking sympathy for the hard road they've had to walk without a partner, they simply seem to want to announce triumphantly how they have sacrificed, persevered and flourished in spite of the often daunting odds.

Still, some of the stories will tug at your heartstrings, such as the sister whose much older boyfriend, now incarcerated, ’impregnated me on purpose,’ even though ’he already had two children.’ Just as unfortunate is the plight of the pregnant teenager whose baby-daddy reacted to the news that he was going to be a father by saying, ’he felt sorry for me because I hadn’t lived and I was going to miss out on life.’

Yet, these same strong females don't seem at all bitter about having been abandoned, most without any help in the way of child support or shared custody. And they have sound advice about how to avoid landing in their predicament.

Basically, it amounts to the age-old maxim ’An ounce of prevention is worth a pound of cure.’

However, accidents will continue to happen because girls will be girls, if you can believe a quote cited in the book claiming that a woman's sexual appetite is four times that of a man’s. That's where Ms. Clark's ’10 Steps to Achieving Success as a Single Mom’ come into play.

In the end, most of the tome's contributors credit God for filling the void left by their absentee sperm donors. Typical spiritual comments read like this entry by the author's mom, Elsie Robertson: ’You may think you are alone to raise your children, but you are not alone. Just remember that God is always with you and He will help you raise your children.’

Read MDK Media, Inc.’s description of Life As A Single Mom: It Isn’t Easy, Or Is It?.