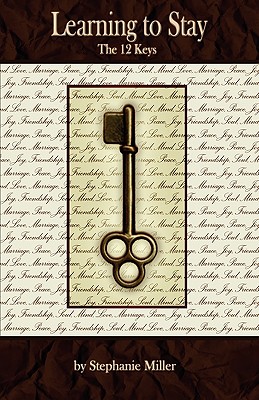 Read a Description of Learning To Stay: The 12 Keys

"Learning to Stay is a book of self-discovery, change, growth and transitions. It's intended to restore your mind and relationships to wholeness, thus creating harmony and peace within your soul…

Through personal development and mentorship, I've discovered ways to change my limiting beliefs that manifested through undesirable behaviors. .. My passion is to prove that anyone, no matter who you are, can change and be a whole person."
-- Excerpted from the Introduction (pgs. 1-3)

Over the past couple of years, I've literally been inundated with books offering dating advice to the African-American community. I suppose this cottage industry of love gurus has sprung up in response to a need for more stable relationships, evidenced by the fact that over 80% of black kids are currently being raised in single parent households. Some of the authors have been credentialed therapists, others simply self-appointed survivors of the battle-of-the-sexes now ready to recount how they found fulfillment in a lurid tell-all.

Although I thought I'd sworn off this genre after reviewing umpteen such titles, what I like about Learning to Stay is the fresh perspective it brings to the table. First of all, it was written by a white woman with a bachelor's in psychology and a graduate degree in counseling. Still, the book is not academic but mostly anecdotal in nature, as Stephanie Miller narrates in engaging fashion an intimate tale about how infidelity almost destroyed her marriage.

Thus, what we have here is a unique case of a shrink herself in crisis. Furthermore, it was certainly novel to discover that her faithful husband, Chris, is a black man, and that it was she, not him, who cheated. With considerable regret, she recalls how, at the time prior to her affair, she was constantly dogging the brother about being a failure as a breadwinner, despite the fact that he was working his tail off at two different jobs. Adding fuel to the fire was Chris' equally-sassy mother-in-law who was poisoning his wife's mind by making destructive statements like, "He is incapable of providing you with a good life."

Instead of taking the kids and moving in with her mom, Stephanie briefly resorted to adultery. Fortunately, she soon found herself on the road to redemption, this following an intervention by their minister who forced her to confess everything to Chris. Ultimately, their marriage was saved not by conventional counseling methods, but by following a faith-based path featuring a dozen key steps which started with that intervention but also included such spiritual elements as prayer and soul searching.

Today, the Millers are not only blissfully-married but are sharing their secrets of nuptial bliss as certified Marriage Group Facilitators in Colorado where they have a thriving practice. An optimistic opus putting forth the proposition that sound relationships can be forged on the bedrock of faith, introspection and unconditional love.