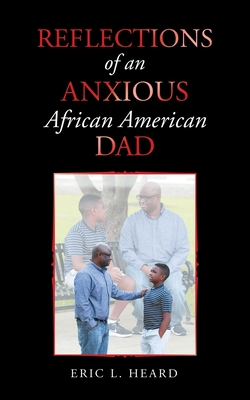 Read a Description of Reflections of an Anxious African American Dad

Following a troubled childhood, Eric L. Heard, an army brat who resided in Germany and Japan, decided to write a book warning African American fathers to up their game as responsible parents. He looked back at his early life in Pensacola, Florida, a Black community confined by the systematic bias of Jim Crow. No challenge or obstacle would emotionally cripple Heard, for he earned a BS in engineering from Florida State University through sheer determination.

Every book has a purpose. “I wrote this book to connect my childhood to the challenges I face as a father of an African American child,” Heard wrote. “I have come to realize that I need to face the ghosts of the past to raise a son who can be ready for the future. The uncertainty and pain that were instilled in me fuel my anxiety and irrationality in ways that I pass on to my son as a father and mentor. I think about that look of terror on my son’s face during that fateful afternoon after school and hope it set off a chain of events that have allowed me to become a better man and ultimately a better father.”

The look of terror, to which Heard referred, occurred when his son, McKinley brought home a math test score of 70 percent. The boy had caused “small problems,” where school officials continued calling his wife at work. She was angry. Heard didn’t want his son to become a statistic, another Black kid down the tubes. He didn’t want to become a deadbeat Dad or a failure as a father. The elder Heard felt education was important for a Black boy to have a fighting chance in white society.

So that his son wouldn’t be labeled as out of control, Heard believed he was forced to discipline him so the boy would not surrender to outside influences. The father saw how the sweet allure of the streets could grip a young kid. He grabbed his astonished son, the 5th grader, and shouted at him. The child became quiet, and then he cried.

Flashbacks fed his mind with possible negative outcomes, such as the boy getting suspended or kicked out of school. All of this fuels the father’s “excessively anxious” thoughts. He thought back to the small Black community in Pensacola, a neighborhood of working men and women in the 1970s. They lived in support job posts, putting together as “a life of faith, resilience, dignity, and hope.”

Heard is fine with his recollections of his family, naming all of the significant members with love and care. The majority of his clan lived just five houses from each other. His grandparents’ home was the hub of family activity, His grandfather worked as a chef at the local yacht club. His grandmother toiled as a cook at an area nursing home. But his mother, prone to tantrums, was a very dark-skinned woman, who was, according to Grandma, was “very color struck.” Her colorism was based on a belief that light-skinned Blacks had a better chance in white society than darker ones.

Excessive drinking plagued the Heard household. After his mother took the boy and his two sisters to live with his father on a military base. Often his drinking prompted the senior Heard to angry shouts, taunts, and violence, which the author writes “caused a dreadful childhood.” His mother was also a willing participant in the ruckus. She had an ongoing tense relationship with the boy’s grandmother. The author noted his mother, often emotionally depressed, tried to be a good mother, but the battles with the older woman soured the family bond.

On one occasion, his mother sent him to the local grocery store to get her a tall can of Colt 45 and Newport cigarettes. When Granny Eileen discovered what the mother had done, she blasted her for sending the boy to buy items prohibited from purchase by minors.

Heard was a good student in school, but he was affected by the troubles in his home life. “When there is a lot of chaos and turmoil, I feel that all of us try to find an oasis of peace in anything within reach,” the author wrote. “It shapes our future responses as adults and is part of why people behave in such irrational ways.”

Ever analytical, Heard finds the critical lessons in the rapid rush of events of his childhood and teen life. He learns two things: first, that things can change very quickly; and second, to listen closely to people when they tell you something, and always ask follow-up questions. However, he appreciated the good times on rare occasions when his parents declared a truce. Also, he learned the power of alcohol and its role in his family as a disrupter.

Moreover, Heard understood America has changed dramatically, requiring more from our youth since his years of Jim Crow. But he knew much will be demanded of his son today. “I hope America, and ultimately African Americans, work to demonstrate a different life for those who live in the neighborhoods of oppression and despair, because it can light a fire in some of the youth to make changes to overcome a tsunami of institutionalized, metastasized negativity.”

Heard’s slender book, Reflections of an Anxious African American Dad, offers some remedies for sensitive children trying to overcome challenges and deficits of their upbringing. Although some readers might think some of these insights are a product of self-doubt and overthinking, there is much here to be appreciated. Black parents need every nugget of wisdom and mother wit to stem the firestorm of bad negative influences from outside the home. This book serves as emotional vitamins toward that quest.