Book Review: Love in the Age of Dragons 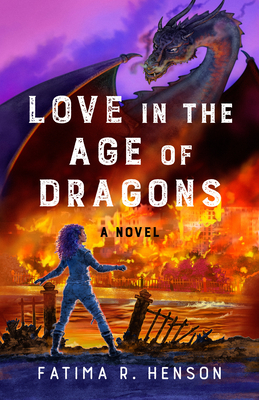 Read a Description of Love in the Age of Dragons

Fatima R. Henson’s Love In The Age Of Dragons has all of the best ingredients of fantasy, speculative fiction, and science fiction. There is very little narrative space devoted to love, courtship, or romance. The author, a history teacher of Atlanta, Georgia with a yen for fantasy tales, expands the rules of traditional dragon storytelling, widening the evil deeds of the modern winged, fire-breathing creatures set by such visionaries as Anne McCaffrey, J. R.R. Tolkien, Jo Walton, Michael Ende, Christopher Paolini, and George R. R. Martin.

In Henson’s tale, the lead character, Ayanna Grace, a 17-year-old, is existing in an underground subway. She, the daughter of a scientist, has lived in this subterranean community for two years since a wormhole developed by her father brought a flock of dangerous dragons to our planet. Instantly, they go on a campaign of scorched earth, destroying city and country, and sending the citizens seeking shelter underground.

Her description of the flying scourge unleashed on the planet is rich with blood-curdling detail: “Dragons were just animals, no smarter than a wolf or a crocodile, but certainly larger, faster, and more vicious. Ayanna was no soldier. She knew what the massive creatures could do. Their armored skin and claws alone often destroyed their victims long before they blew out a deadly flame to finish the job.”

Ayanna’s friend and mentor, Dr. Keaton, is in ill health, with congested lungs. He had been a colleague of her mother, Dr. Naomi Grace, both having served as doctors at Dixon Lee Memorial Hospital. Ayanna acts as a diligent pupil under the guidance of the doctor. The dragons had killed Dr. Keaton’s family – his wife and daughters. Ayanna is familiar with loss and tragedy. Her mother died of cancer.

Some people ventured out to the surface from the safety of Terra but it was a death sentence. Very few survive. The guardsmen and the Watchers Council learn of Ayanna’s adventure from their compound, warning those foolhardy souls of the creatures “brutally ripped to shreds, bitten in half or burned to ash.” The Watchers locked her in a closet with no water or food for three days. She was allowed no visitors and a bucket for a toilet.

However, Ayanna is determined to go back to the surface, mainly to get the medicine needed to stabilize Dr. Keaton’s health. She figures it would be a quick run. Once on top, she knows that the blazing power of the sun would dehydrate her and cause her to go mad and blind. The city is a collection of abandoned cars, corpses, and ruins of destroyed skyscrapers. The author creates an ongoing sense of tension, anxiety, and suspense with the murderous dragons flying overhead and the remaining crazed humans wanting to keep alive in their chaos. In fact, a dragon gets her in its grasp but she struggles and frees herself. There is pure terror in the scene. A boy saves her from the creature. They come to a truce and become friends. She confesses that she feels like getting away from everything.

With the memories of her dead father and the terrible act of unleashing the dragons on earth, she blames him for the tragic consequences that the world finds itself in. Once she goes home, she fixes herself on Richard, the legendary soldier who wiped out a group of dragons at one of their lairs. But the community is suffering from a lack of food, water, and proper medicine. They recall the unorganized effort of the day of the evacuation, where the army fought bravely and the remaining citizens tried to escape to the few bases in central and southeastern America. Too many dragons, so many dead.

Still, the real crisis is that someone is giving untreated water to people, causing infection. There are too few antibiotics to treat the sickness. The sickened people are filling the clinic, complaining of symptoms, of a serious health crisis. The solution to giving untreated water to the community is exploding the dam that is blocking the water flow. Ayanna knows where the dam is located so Colonel Daniels sends his team to blast it. The mission is where a group of dragons are and it will be conducted in the dark. The mission involves traveling in the pitch-black tunnels and then speeding in jeeps to the bomb site.

Ayanna, separated from the troops, escapes from dragons, with her friend, who she met on her previous trip to the surface. The mission to explode the dam is successful but it is not without drawbacks. Two of Richard’s units are seriously hurt and needed medical attention. Henson keeps the action and conflict moving with tightly written scenes, designed to evaluate the horror level in the reader.

Although Henson’s title proclaims love in the title, there is very little intimacy throughout the book. Ayanna likes Jackson, the boy who saved her on the surface, and Richard, the brave militia leader. She uses the heroine’s feelings for the two men to etch out the mainstream themes of community, teamwork, loyalty, trust, and leadership. When the dragons suddenly find their way into the compound, the army valiantly holds them for a brief time, and the rest of the survivors flee to safety. Even Ayanna is injured when she confronts a dragon, with so many injured and dead around her.

Furthermore, the final confrontation is riveting and heroic in this YA fantasy tale of the mythic creatures and selfless warriors, culminating in a magical parable of courage, determination, and the hard-earned gift of human survival. Henson’s novel is going to bewitch a lot of young people.

Read SparkPress’s description of Love in the Age of Dragons.