Book Review: I Missed the Bus, But I Arrived On Time! 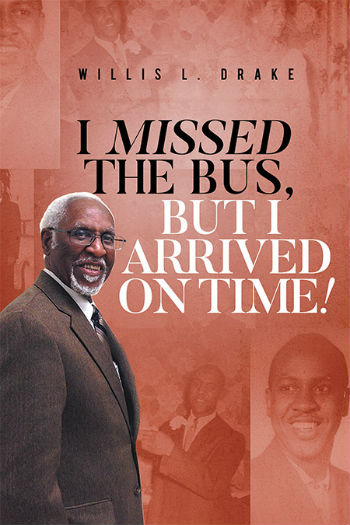 Read a Description of I Missed the Bus, But I Arrived On Time!

Our reading community gets tired of memoirs celebrating guns, drugs, loose morals, and general mayhem. Willis L. Drake’s recollections, I Missed The Bus, But I Arrived On Time, bucks this trend of lawlessness and decadence with a tribute to Old-School family traits of hard work, dedication, determination and self-reliance.

Raised in St. Louis, Drake enjoys a pleasant childhood based on Christian beliefs, alongside his hard-working father and dutiful mother. His father worked night shift on a job, which allowed him little time to spend with his family. Still, his son recognized his father as a role model and a good provider. He was very close to his mother, whose family believed to be a woman of visions and divinely blessed. As a child, he remembers his mother’s “bright outlook,” proclaiming “her boy could do anything if he put his mind to it.”

While Drake is “not a trained writer,” his gift is to render the magnification of small events, to bring commonplace situation to our attention so we realize their significance to his life. Each chapter is full of important building blocks that form the whole Man, either mentally or spiritually. We forget there are more of these people in our community than thugs, dope dealers and second-story men. They played by the rules. . Drake was hired to work for a dentist, Dr. Layne, although he was very young. From ages 12 to 17, he worked for the Laynes, a job that provided financial compensation and “a prospective on handling real-life situations such as work experience, social activity and self-worth.”

His older sister, Shirley supports him through junior and senior high schools. Meanwhile he takes a custodian job at the popular Peacock Alley, a club featuring jazz artists such as pianist Ahmad Jamal. Later, he enrolls at Harris/Stowe Teachers College, living at home, but injures his knee. After his rehab, his grades suffer and he withdraws from college. His mother continues to say, “God has a plan for him and trust in the Lord.”

One triumph after another happens in his life. A job at the Daily Record Company, a government contractor, appears, and he is promoted from messenger to file clerk. Along the way, he joins the union with another government job as a Federal Civil Service position, becoming a shop steward. Luck follows him. He checks out at Army Aviation Command on a Friday and transitions to a new job at Mobility Equipment Command. His hard work ethic lifts him into another unit, The Requisitioning Processing Unit, established to requisitions in Vietnam War, is his last stop before working for McDonnell Douglas Aircraft Corporation in 1972.

Other than working at the aircraft firm, a substantial, moving portion of the book is about his wife, Mary, who his mother had three visions of her son’s beloved. The first vision of Mary happened to his mother when Drake was a 16- year-old sophomore, saying she’d seen “a light brown-skinned girl, a very pretty girl.” Her son was totally smitten by Mary, noting she was 5 feet two inches, “thick and stacked, with big, pretty legs.” The couple dated for a brief period and they got married on April 15, 1960 (“the most blessed day of my life).”

With Mary by his side, Drake retired from the Defense Logistics Agency in 2001, finishing 33 years of federal service. He is proud of his service, saying his fellow employees was “a microcosm of our overall society in general.” Decent, hard working people with common interests. Furthermore, he is steadfast about the depth of his faith and his connection with his traditions.

An insightful, candid and inspiring memoir, Drake explores his life in work and faith. “I believe a spiritual person can relate to the circumstance I am describing,” the author concludes. “I believe if there is something that God has in store for you, it will happen within his plan.”

Read Lulu’s description of I Missed the Bus, But I Arrived On Time!.