Book Review: A Night In Babylon 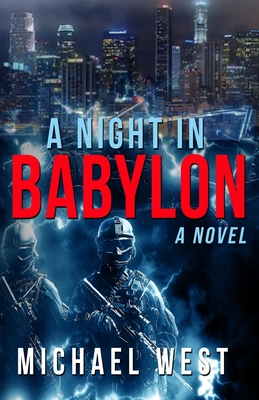 Read a Description of A Night In Babylon

This “Woke” novel, A Night In Babylon, seems ripped from the current headlines. It opens with pow-pow-pow action worthy of any TV cop show, with a pair of officers pursuing a suspect through a rainstorm. West, the mysterious book’s author, knows the language of rage, revenge, and retaliation as the reader is dropped into a red-hot chase after police receive anonymous tip of an armed man connected to the a terrorist group, Stay Ready Soldiers (SRS).

In the City of Angels, there are only good guys and bad guys. The cops, from the opening scene, could come from Central Casting: Higgins the rookie and Cooper the veteran, who joined the force to make the difference but “now at war with the people they swore to protect.” Despite their original intentions, they were defending a system which safeguard the needs and wants of the rich and powerful over the folks at the margins.

From this maddening scene of murder and mayhem, West spins a fractured story of political correctness, societal shame, racial chaos, and an almost Biblical reckoning of light over darkness. We find the terrorists Kali and Geronimo, a looker and a killer, getting the cops in their sights, and riddling the patrol car with bullets, putting Higgins into the Big Sleep. Kali wonders if the SRS members had been set up, for it was an ambush.

This is not the same city that Chandler and McDonald wrote about in their sleuthing classics. This is a darker, more sinister version of the glittering metropolis. “The City of Angels,” West writes, “had become a cesspool of corruption, disease, poverty, and violence. Humanity was no match against the influence of their own demons. While politicians made empty promises, giant corporations profited from disparity. Amidst the unrest and dissatisfaction, riots and protests were spreading like wildfire, and anti-establishment groups were growing in popularity. The government had turned against its own people, and Los Angeles was on the verge of martial law.”

In the age of ultra-violent video games and brutal graphic novels, West never lets the action and tension rest, maintaining a taut string of high drama, especially in the gun battle with the robbers at Bunchy’s pawn shop. In fact, one of the assailants with a shotgun turns out to be his first cousin. Again, law enforcement, namely the Feds, ups the ante by raiding the shop, trading shots with Kali and Geronimo.

While the media and police chief have a running dialogue as to whether the SRS are “freedom fighters or domestic terrorists,” the CIA have decided to employ counterterrorist methods with some mercenaries-for-hire, the Black Hawk Battalion, to stamp out the SRS by any means necessary. The killer squad have sworn to eliminate every members of the group who follows the doctrine of SRS leader Tree Newman.

Readers will find the frantic pace of the narrative compelling, for the author wants the resilience and strength of the community to shine through. These are people who believe in something, who believe in their culture, who believe in their right to exist. They are willing to go the limit, so they resort to violence including firebombs, shootouts, and outright resistance. The police chief’s home is burned down. Dozens of cops are killed as eventually a scientifically augmented being, backed by the Agency’s research is used to tilt the score in the establishment’s favor. Or as one of the lawman, after reading the SRS dossier, says: “Sounds like a bunch of punk-ass kids to me.”

Police reform is definitely an issue of the novel. As one SRS member comments, “All cops want to be gangsters.” They torture, kill, maim, and rape everything in sight, including sweet little Dawn, who never knew people could be this evil. The SRS, namely Red, Dirt, Kali and Geronimo, are determined to protect the people. They believe Tree Newman’s righteous words: Freedom Justice Equality.

However, the novel often wanders into a fog of a hail of bullets and a lethal body count but quickly corrects itself with some timely insights. Like the interview by Society Today host of Police Chief Bryson, about the high level of violence in the city and people afraid to leave their homes. The chief’s remarks could be taken off any evening TV news program in this turbulent Age of Trump.

The Law and Order chief replies: “Well, we’re living in an era of maniacs shooting up schools and churches. It’s a disease. The SRS soldiers are nothing more than a terrorist group. They’re a bunch of ex-cons and hoodlums, a syndicate of anarchists with delusions of grandeur. They’re killed officers in cold blood, they’ve bombed police stations, they’ve endangered people’s lives. Everyone needs to stop glorifying them like they’re a bunch of patriots.”

Sounds like the Commander of Chief’s assessment of Black Lives Matters. As the SRS catches up with some crooked cops and make them pay, the group implodes much like Huey Newton’s doomed Black Panthers with snitches confessing that the outfit was “just a Black Op” for the CIA. Before the snitch goes up in flames, he admits the Agency has pulled the plug on the SRS…every person, place or things had to go.

West’s signature mix of action, radical politics, satire, and inventive genre-blending has something stunning on every page. Although Kali and Geronimo survive the bloodletting, this book will remind readers of its distant influential cousins, Sam Greenlee’s The Spook Who Sat By The Door and John A. Williams’ The Man Who Cried I Am. Not bad for a slender book that could make your pulse race.

Read Foundations 4 Readiness’s description of A Night In Babylon.