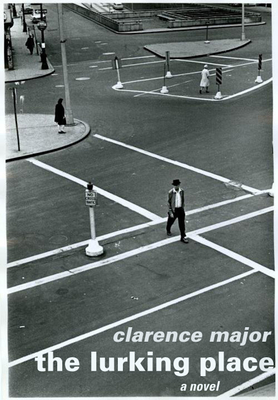 Read a Description of The Lurking Place

Veteran writer Clarence Major’s literary career continues full speed. His latest novel, The Lurking Place, rates among his best, using an experienced, all-seeing eye of character, visual detail, and revealing dialogue. With his unique unerring vision, he has amassed an impressive collection including eleven novels, sixteen volumes of poetry, two books of short stories, and ten works of nonfiction. However, this current work of youth, artistic inspiration, love, and a yen for travel reaches one of his creative peaks.

The author’s lead character, James Eric Lowell, mirrors Major’s life in a sense, beginning with is obsession with words and verse, committing his time and energy to a career of bringing his poetry to the public. As a young black poet, Lowell is a credit to the writer’s skill, created with very little interference, allowing the book’s narrator to breathe and think for himself. The marvelous treat is the richly detailed novel moves through the pivotal era of the late sixties with its counterculture bent of social change and upheaval. Not only is it the Summer of Love, Woodstock, and hippies and the government skirmishes with the opponents of the Vietnam War, there is internal restlessness among those coming-of-age to make their mark in the world.

Winding up his tenure doing research, Lowell, feeling old at twenty-five, believes he needs to publish a book before anyone will take him seriously. He compares himself to the all-time greats. His working title, Rendezvous in the Rain, haunts his every moment away from the typewriter. He is new to the game of being on the speaking circuit, so when a woman asks where he gets his inspiration from. The young poet replies: “Inspiration comes from any and everywhere, motifs too, and yes, I rely on my own experiences and my imagination.”

Soon Lowell’s experiences includes Sophie, a white girl with dyed blond hair. He meets her at work. He concludes Sophie is smart, ambitious with a dislike for her large breasts and flat behind. Still, the poet feels she is beautiful. She is from the Bronx and he is from Brooklyn. Her sister, Belinda, sounds the alarm after the couple become intimate and move into a place on the Lower East Side. Her father wants Sophia to come home and not mix with the coloreds. As this is 1968, the poet is dumbfounded and angered by the killings of Malcolm X and Martin Luther King and concludes that this country is on the brink of cultural collapse. Maybe he should go to Mexico to collect himself and finish his book.

With his mother’s sage words of finding financial stability ringing in his ears, Lowell decides to go south of the border, with Sophia in tow. After a wonderful send-off by Lowell’s pals, Belinda comes to their apartment, sitting on the edge of the couch with her legs locked and her hands on her lap. She conveys a warning from her father: “He says he has nothing against colored people, but the world is against the kind of relationship. He says you’re asking for trouble. You will not be happy, Sophia, not with a colored man, a Negro. Please come home. You would make Poppa happy.”

Once the couple arrive in Mexico, Major shows the emotional strain of a fledgling relationship in a new setting. While the American establishment is dealing with draft resistance and cultural outlaws, Lowell does not know how to contend with the Beats with Ginsburg and Kerouac, the Yippies with Abbie Hoffman and Jerry Rubin, the LSD-guru Timothy Leary, and the gun-toting Huey Newton and Bobby Seale. He was glad to be in the relatively comfort of Mexico. With the artificial cocoon of endless hugging and smooching, the couple settles into the numbing landscape of a love that needs nobody and nothing. But everything must change. When Sophia returns home with bruises on her thighs and a passionate hickey on her neck, she offers no explanation, leading him to recognize their union is unraveling.

Meanwhile, the “expressionist poet” sends his work through the mail, sometimes receiving rejection letters from literary magazines. He posts his submissions in a professional approach, knowing success comes rarely through the slush piles of the quality publications. Major reflects on the determination and focus of a novice poet scrambling to hone his craft while advancing his reputation. There is much to be learned about the time and energy in making a name among the elites of the poetry.

Like his superior work in his former novels, All-Night Visitors and Reflex and Bone Structure, Major explores several segments of frank, candid sexual episodes where free love is practiced as well as moments of fiery romantic coupling. Lowell and Sophia make a sizzling pair, but he sees her walking with a handsome man, holding hands. He feels the usual pangs of jealousy and anger. He considers the weight of emotional involvement, and trust, infidelity, cheating, and betrayal. The scenes of reflection about the matters of the heart are depicted by the author without sentiment and romantic gibberish. Also, Sophia is not a good liar, so this leads to their separation.

A true poet, Lowell demands a higher standard of himself and the art of being a wordsmith. “While writing poems, I’d already stumbled into questions about the relationship between truth and lies. I saw poetry as an art form above and beyond the complicated nature of lies. Poetry sought to remain in the realm of higher truth.”

Now alone and revising his work, Lowell removes unnecessary words, opening and closing lines, deleting repetitive phrases. He checks the words’ intentions and rhythms and meters. He knows finding a publisher might be difficult. He is also wary of trade publishers, with their quality books, would publish an untried author. Small presses and university presses were more willing to take a risk for the new poet. Major guides the amateur through the maze of publishing poets with a sense of grace and understatement.

After his book is published, Lowell finds himself stunned when his poetry is recognized. He tries to reunite with Sophia but nothing is the same. The shameful events mount up until there is nothing between them. Both move on with their lives in a world battered by “race stuff.” As one of the whites ponders about the current situation between the races in the sixties, he notes: “You know, all the troubles the Negroes are causing. They’re giving the police a lot of trouble, tearing up their own neighborhoods.”

Major was there as a young artist in the Apple during the height of the Village’s popularity. A local reader will experience the legendary East Village locales of St. Mark’s Place, the Strand bookstore, the Electric Circus, the Dom, the gathering of the poets at St. Mark’s Church, and the jazz venues of the Village Vanguard, the Blue Note, or Small’s. In a sense, Major’s latest novel is a glorious time capsule, complete with the flavor and color of one of the most turbulent, thought-provoking times in American history.

Prolific in fiction, painting, and poetry, award-winning Major has a special way of sharing deeply personal stories in his new book. His work is a soul-nourishing read, avoiding the usual buzz words and clichés of the standard period pieces. This book is full of secrets. What it reveals is how commitment, achievement, and joy can be intertwined, with success and an open mind. Lowell learns to stop disappointment and failure as he chooses to soar in this life-affirming novel.