Book Review: Blend In or Fade Out 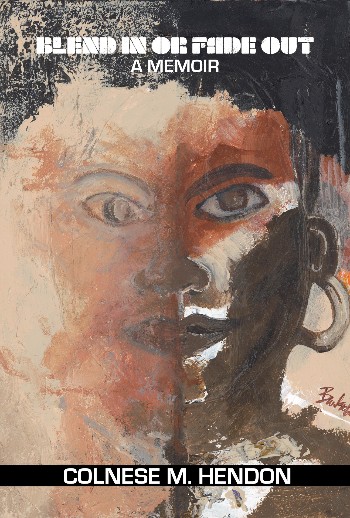 Read a Description of Blend In or Fade Out

The main theme of identity takes center stage in Colnese M. Herndon’s emotional riveting memoir, Blend In Or Fade Out, as the writer investigates her confusing blood ties. She asks: Who am I? Whereas this book is filled with disappointing mishaps and heartbreaking tragedies, the reader is treated with determination, perseverance, and courage worthy of a mythic heroine. It is not surprising that hard-luck Herndon comes out triumphant when she is awarded a 2009 fellowship of the Givens Foundation for African American Literature, wins three times the Hurston-Wright Foundation (2014, 2015, and 2018), scores in the 2017 VONA Voices and the 2019 Bread Load Writer’s Conference, and the 2019 Write of Your Life writer’s workshop in Venice, Italy.

Her poetry and short fiction have been published widely. She holds a BA degree in professional communications- public relations and a MA in public administration from Metropolitan State University, Also, she now advocates in court for children in the child welfare system. However, the Hendon memoir candidly deals with the harrowing journey of a biracial girl on a mission to discover her true identity. A young girl, adopted by a middle-class Black family, growing up by her wits in the raucous South Minneapolis community in the 1960s and 1970s.

Her poem serves as the personal cornerstone for this quest through family betrayals, childhood bullying, tainted romances, abusive men, violence, anger, and drugs and alcohol:

I am the daughter of strangers Of estranged races who left traces of themselves in me I am the sun-kissed bastard child of children who gave in to fever, the heat of rebellion, Thirst for the unknown for what could not be But what was and ultimately become me.

Early on, Hendon has questions about her adoption with her parents and their desire to keep her. She further quizzes them about whether her birth parents miss her. Her adoptive mother explains her birth Mom loved her so much that she decides to put her up for adoption. She also says her court records have been sealed so she cannot locate her birth parents. “Now you’re our little girl,” her adoptive mother says.

Children can be unkind. In elementary school, Hendon stands out like a carnival freak with her light skin, freckles, and “good hair.” As she looks at the students, she cannot fail to notice the effects of colorism, the worship of fairer skin, and the “good hair.” She prays to get a darker skin and persuades her mother to press her hair with a hot comb so the other girls would not tease her.

Hendon writes: “Looking different and being different made me uncomfortable because it reminded me that I was adopted. Who is my real family.”

To Hendon, she possesses an early attraction to bad boys, such as Randy, a second-grader, who slapped a teacher’s eyeglasses off her face. She adores strength. A summer vacation in Chicago only promoted her outsider, where the majority of her father’s relatives lived, feeling “like an albino in Africa.”

Depressed and isolated, Hendon is filled with self-loathing and determined to birth a baby, all her own. She chooses Blue, a deep shade of brown, with almond-shaped eyes, and a bad boy reputation. He, at 17, drove a Cadillac, always had money, and is a good kisser. She looks around at the other girls who dropped out to turn tricks. The film, The Mack , was popular at the time, as well as books by Iceberg Slim and Donald Goines.

Blue sleeps with her and soon she discovers she is pregnant at age 16. Her lover gets in trouble and goes to the local Juvie center. With a child inside her, she goes to parties thrown by Catfish and his thugs, The Undertakers. The hood makes a move to be her man, but she knows his boys were known for their brutal gang rapes. Hendon is superb with her depiction of this sepia Damon Runyon list of characters: Blue, Catfish, Martin, Tina, Gee Rich, Tammy, Glenda, the sisters with their knack for ‘the five finger discount,’ and the white girls on ‘the ho stroll’ on Hennepin Avenue. Booze, nose candy, gorilla pimps, Wild West antics.

In May 1974, Hendon has a stillborn baby and is in the hospital for four days. Blue never visits her and when she sees him later at a nightclub, he slaps her. He ignores her after that. Her depression deepens and starts taking downers and alcohol, ‘a perfect mix.’ Like most folks in her community, she dabbles in the word of the Lord, attending her mother’s AME church on the early Sunday morning and later attending her father’s church, Zion Baptist church. She believes trouble doesn’t last always.

Still, feeling apart from her family and community, a nagging sense of the Other haunts her. Out in the streets, she joins a group of friends restless and rootless just like her. With them, she wakes up on a cold concrete floor and wonders what lies ahead. Blue comes in and out of her life, demanding money, and abuses her. Her parents think she would benefit from a stint in the psych ward,

“I wondered what caused people to go crazy. Because I was very much in touch with reality, I was pretty certain I was not crazy. It was just that reality wasn’t all that satisfying to me at that point in time. I doubted that the psycho ward would snap me out of my depression, but it was something to do.”

Hendon leaves the ward in just three days. She goes on a partying spree with her girls, bar hopping and after-hour clubbing. With her baby dead, she realizes her boyfriend doesn’t want her unless she can sell her body. She feels she’s better off dead. She tries to cut her wrists but is taken to the hospital in time. She gets arrested for shoplifting at a local department store. So God saved her life, but for what purpose? She keeps asking herself that.

Eventually, she becomes pregnant with another man, DeAndre, from the projects. When she tells him in early summer 1976, he says: “We’re not ready for kids. As good as you look, you could make some cash money.” Furthermore, he denied fatherhood so she applied for welfare. Her baby, Destiny, is born plump and healthy. She writes DeAndre: “If you’re so against having kids, next time don’t be quick to jump in bed. You’re a grown man, you know what makes babies.”

She goes from one job to another, suffering from ‘the mulatto blues,’ until she decides to leave Destiny with her mother until she meets her real Mom. Finally, she meets Nancy, a slender white woman with gray hair. Her mother has another daughter, China, a teen, and they bond as best as they can. Her real name is Teresa Marie. She says her mother reminds her of Mae West with some spunk and a bit of attitude. There is some confusion about her real father, but when she meets her biological family, she starts to heal. Her quest to love herself in all areas comes full circle when she returns to the church and renews her faith in God. She becomes a whole person, merging her two halves of herself spiritually and culturally. This mark the beginning of her glorious journey to redemption and revitalization. Like most of us, Hendon acknowledges she has a long, hard way to go in the following chapters after the conclusion of this instructive, enlightening textbook of life.

Read Strive Publishing’s description of Blend In or Fade Out.