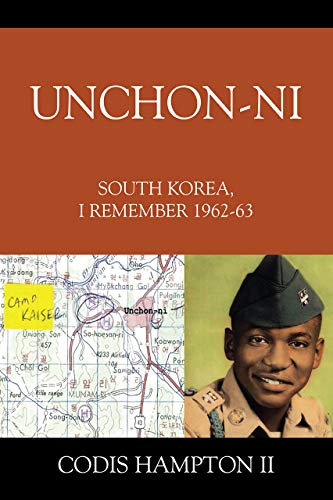 Read a Description of Unchon-ni: South Korea, I Remember 1962-63

Codis Hampton III’s stirring account of his time in the military in South Korea was the first book produced by this veteran, who has gone on to write five offerings. His debut chronicle, Unchon-Ni, deals with the youth’s enlistment into the U.S. Army shortly after his 17th birthday, with his parental consent. He was a troubled teen, unimpressed with school lessons and education.

Hampton hung out with the wrong crowd at St. Benedict de Moor School and then followed by more dismal academic results at high school. In fact, officials discussed him enrolling in a trade school. The author walks us through his enlistment in the U.S. Army on November 1961, getting his first exposure to military life at Fort Carson, and later advanced infantry training at Fort Ord, California. After that, Hampton is shipped out to a base in Pusan, South Korea, still a young kid in the throes of puberty, not on the brink of manhood.

“Korea,” Hampton recalls, “opened my eyes to life. It’s ingrained in my brain because of the incidents, experiences. It’s as if they happened yesterday. That is what I gained from living such a full existence for almost 14 months of my life. The story is about how I became a man. I learned another lesson while authoring this book. I missed that time in my life when my mind was free, when my emotions came from my soul.”

However, Korea is another story as well. If Hampton thought the racial conflicts was going on at home full tilt, and if he regarded it would be a respite from all of the bigots and prejudice over there, he was mistaken. White soldiers told the girls that they had tails. The author tells of one of his black Army buddies having to strip naked to show he was human. All of the myths and stereotypes of Jim Crow followed them abroad.

Korea was also dangerous. Squads of North Korean regulars would come across the DMZ, take shots at them, and sometimes kill them. The darkness was also an enemy. You were warned to stay out of the dark alleys. You were warned not to get drunk where you couldn’t defend yourself. You were warned a village girl could get you in trouble. And you were warned to always use a condom when dealing with a Korean female. Period.

Hampton’s writing is very descriptive and informed in matters of the heart. He doesn’t shy away from wrestling with the insecurities and contradictions of being a teen coming into manhood. Some of his best writing in the book is when he explains his emotional attachment with a Village girl, Jeannie, which alarms his buddies. One pays a girl so he can be exclusive sexually, while the other plays the field. Hampton wants to marry the girl, but soon he learns the difference between sex and love.

While the Cuban missile crisis and civil rights protests continue, Hampton reaches a new level of maturity, an emotional growth spurt. He realizes time and life should not be wasted. “You can’t stop time,” he writes. “You don’t get a do-over. What’s happened has happened.” Although this book could have been condensed substantially, Hampton’s engaging coming-of-age chronicle proves just how valuable the present is to build a stable, solid adulthood.