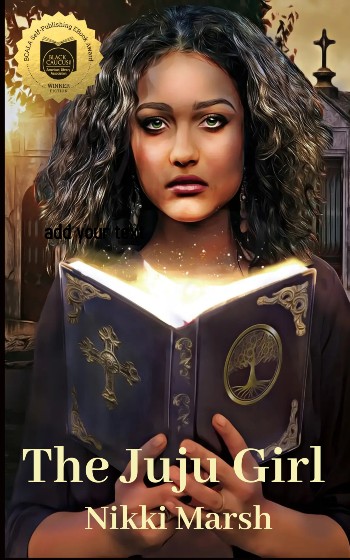 Read a Description of The Juju Girl

Awarded by the 2022 Black Caucus of the American Library Association Self Published ebook in fiction by an African American author, Nikki Marsh’s The Juju Girl has everything an outstanding YA book should possess. Gabbie, a 15-yer-old girl, comes into her own after she is forced to flee from her small town along the Mississippi River by the powerful Great Storm of 1893, On the brink of womanhood, she arrives in New Orleans and is thrust into the class-conscious Creole Society, finding herself a stranger in a strange culture.

What sets Gabbie apart from other girls of her age is that those in the know believe that she has the Gift. The veterans of the occult view her at the beginning of her powers that emerge where she can see events before others can and hear things that others can not. Truly, she possesses the wisdom of the mighty veil that separates the living from the dead. Now, she is on her own, not protected by her ever-watchful parents.

Marsh, a true word technician, creates a complex, complicated Creole world where status and the alchemy of magic, juju, and spells matter most. Gabbie’s father and uncle fish and gather oysters for seafood feasts which include gumbo, crawfish etouffee, red beans and rice, and banana bread pudding. However, her father and Uncle Phonse are missing from the event and Maman is injured by a serious head wound from flood debris. Rescuers send Gabbie to her Aunt Lucinda’s place in Crescent City. Meanwhile, her uncle searches for her father, finally finding him among many unclaimed bodies.

Uncle Phonse sends Maman to join her daughter in New Orleans, where a relative, Neni, welcomed her. Bad blood exists between Maman and Aunt Lucinda. There is Brigitte, who is considered “a foolish, entitled girl” and “a miniature version of the Aunt.” There is sizeable family drama when Gabbie, nervous about a grandfather who never wanted to meet her, calls him “a stuffed pig with a mustache.”

Her characters are written as full-blooded, quite human, but with flaws and all. As the novel goes on, the limitations and boundaries of class and status become more pronounced and harsh. With the ball upcoming, Gabbie’s mother gives her a hand-me-down dress, a well-worn article from Brigitte. She is supposed by her Uncle Phonse, as well as her grief-stricken mother, but he refuses to let her stay with Maman. He realizes her mother is suffering emotionally.

Brigitte, her cousin, seems distant, but she knows how the five years have changed Gabbie. The tragic consequences of the storm still haunts Gabbie and her family. Everyone says Gabbie has the gift. She doesn’t want to believe in signs or magic or sorcery. But her community feels the Gift will protect her. According to the gossip, Auntie has fallen in love with Uncle Phonse, yet the man has a wife and a stepson back in Buras. Auntie gives Gabbie a black cat bone for protection. Still, Gabbie misses her old life, a comfortable existence where balls, second-hand gowns, and young beaus were unimportant.

Again, Marsh’s straightforward narrative quietly illustrates the power of juju when it transforms one’s emotional and physical life when Maman sends Gabby to Neni (or Miss Marie) because she believes the girl has the gift to pierce the veil. On the other hand, Neni feels that Maman’s sickness is no longer in the flesh but in her soul. Despite the herbal protection given her, Maman has lived a life before Gabby’s birth that still shadows her.

To conjure the proper atmosphere for spiritual prowess, Neni tells Gabby how to control her powers: “If you want to master your powers, I can teach you, but only if you submit to my guidance and teaching and never question me. You must believe in you yourself and in your powers. That won’t be easy. You must conquer your fears and control your thoughts, actions, and emotions. You must always stand for truth and righteousness. You must only use your powers for good. Are you ready to become the person you are meant to be?”

While Neni has another life in the material world, working to clean up other people's homes, she rules as royalty in the spirit world. Gabbie is a willing student of her skills in the realm of the occult. She knows she has a lot to learn about rootwork, gris-gris, and charms. Unfortunately, she desires Stefan and asks Maman if he would be interested in her. At the ball, Stefan seems bewitched by Emilie with her violet eyes and a gown from Paris. Gabbie doesn’t dislike Emilie but she will do anything to get Stefan, so she works a spell on her which consists of overwhelming bad breath that causes Stefan to hide from her. All of the eligible beaus steer clear of her due to her rancid odor. Maman is afraid of Gabbie’s apprenticeship with Neni. Neni feels Gabbie has let her down because of the spell on Emilie. She orders Gabbie to make amends to Emilie and Julian before she would work with her again. Gabbie also notices Stefan is having terrible headaches since the death of Brigitte. She wants to tell him the whole story but she cannot and the guidance of Maman and Felicie is closed to her.

The author weaves a romantic triangle between Gabbie, Julian, and Stefan. Julian likes Gabbie but she wants the relationship to be as friends. She wants Stefan and his heart slowly opens to her. However, Auntie hates Stefan and Gabbie because her beloved Brigitte is dead. Gabbie’s Maman supposedly accidentally killed her. Neni or Miss Marie laid three small gris-gris bags to protect Maman, Felicie, and Gabbie.

Even root work, charms, and spells can go awry. Can she make amends to Emilie and Julian? Can she fully win Stefan’s heart? Can she again earn Miss Marie’s trust and confidence? Can she reverse the spell which has allowed the spirit of the dead Suzanne to tighten its grip on Maman’s soul?

In a last-ditch effort, the Juju girl chants to set things right, to put all of the situations back on track: “Within this place. With this time, A spirit owns my Maman’s mind. And dwells within a body pure. Which cannot evil long endure. Guardians of the Spirit realm. Hear and guide my plea. Release Suzanne, who dwells inside. Out to confront me.”

What a literary Hoodoo journey! Nikki Marsh’s The Juju Girl radiates with brilliance and wonderment, immersing the readers in all of the delight of the late 1800s New Orleans, complete with the cultural seasonings of the Creole society. For a YA novel, this is a masterfully written work and a powerful experience without the grown-up confusion sometimes found in fiction of this genre.