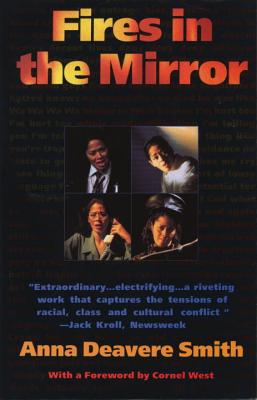 Fires in the Mirror
by Anna Deavere Smith

Read a Description of Fires in the Mirror

Book Description:
Derived from interviews with a wide range ofpeople who experienced or observed New York’s 1991Crown Heights racial riots, Fires In TheMirror is as distinguished a work ofcommentary onblack-white tensions as it is awork of drama. In August 1991 simmering tensions in the racially polarized Brooklyn, New York, neighborhood of Crown Heights exploded into riots after a black boy was killed by a car in a rabbi’s motorcade and a Jewish student was slain by blacks in retaliation. Fires in the Mirror is dramatist Anna Deavere Smith’s stunning exploration of the events and emotions leading up to and following the Crown Heights conflict. Through her portrayals of more than two dozen Crown eights adversaries, victims, and eyewitnesses, using verbatim excerpts from their observations derived from interviews she conducted, Smith provides a brilliant, Rashoman-like documentary portrait of contemporary ethnic turmoil.