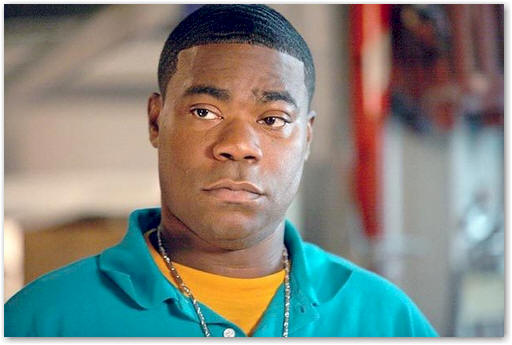 Native New Yorker Tracy Morgan was born in Brooklyn on November 10, 1968 and raised in the Bronx where he attended De Witt Clinton High School. He started doing standup as a teenager and was discovered in 1984 at the Apollo Theater on Amateur Night which kickstarted his showbiz career on the comedy circuit. He eventually landed a recurring role on the Fox sitcom ’Martin,’ which by 1996 he had parlayed into a gig as a member of Saturday Night Live's ensemble cast.

Over the course of his seven season tenure on SNL, the irrepressible funnyman introduced a variety of colorful characters, including Brian Fellows, Astronaut Jones and Woodrow. He also became known for his impersonations of pop culture icons like Al Sharpton, Mr. T, Star Jones, Aretha and Mike Tyson. In 2003, he left SNL in order to star on his own sitcom, The Tracy Morgan Show. Meanwhile, he began appearing on the big screen in such films as Head of State, The Longest Yard, Little Man and First Sunday.

Currently, Tracy is co-starring opposite Tina Fey and Alec Baldwin on the hit NBC series ’30 Rock.’ And back in January, he delivered the most memorable speech of the awards season at the Golden Globes when he accepted the Best Comedy Award on behalf of the entire cast, explaining that ’Tina Fey and I had an agreement that if Barack Obama won, I would speak for the show from now on. Welcome to post-racial America! I am the face of post-racial America. Deal with it, Cate Blanchett!’

Here, Tracy talks about his new movie, G-Force, where he does the voice of Blaster the guinea pig, an animated character. The film revolves around a crack squad of FBI-trained animals called upon by the U.S. Government to put a stop a diabolical billionaire bent on world domination. 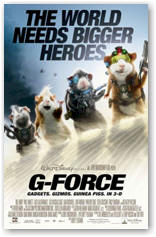 Kam Williams (KW): Hi Tracy, thanks for the time.

TM: [Chuckles] Let's see’ Walt Disney’ Jerry Bruckheimer’ Nicolas Cage and everybody else involved. I thought it would be cool.

KW: Was it hard on you playing an animated character and being restricted to doing a voiceover?

TM: No, actually it wasn't. People recognize my voice, and that's what you want. And I'm not the first person to ever do this. I mean, Eddie Murphy's done it’ Martin Lawrence has done it’ Seinfeld's done it’ Chris Rock has done it’ so I wanted to make the most of my opportunity to do it. And I had fun!

KW: Laz Lyles was wondering who you based Blaster on.

TM: I wanted Blaster to be a part of Tracy Morgan. So, I just kept it simple.

KW: Attorney Bernadette Beekman points out that a PG-rated kiddie adventure marks a bit of a departure for you, since most of your comedy shtick has been adult-oriented. How did you enjoy the change of pace?

KW: Did you spend any time on the set during the shooting of the film's live-action sequences?

TM: Actually, no I didn't. They would just fly me in and I'd go into the studio to lay down my vocal tracks and mix it up with Hoyt [Director Hoyt Yeatman]. He would direct me and share his vision of the film with me. But I never visited the set of G-Force. We kept it simple like that.

KW: How did you like the final cut when you saw how Hoyt had blended your voice and all the animation in with the live-action?

TM: I just went to see the movie yesterday, and I thought it was beautiful. And in 3-D, the special effects were awesome.

KW: What is G-Force's message?

TM: That at the end of the day, family is everything.

KW: What type of audience do you expect it to attract? 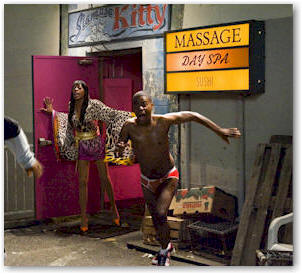 KW: Are you planning to do a Brian Fellows movie, or to make a spin-off of any of your other SNL characters?

KW: I understand. I see that you’ll soon be starring in a remake of Death at a Funeral with Chris Rock and Martin Lawrence.

TM: I think it's going to be awesome. Chris Rock and Martin Lawrence are a couple of my heroes in terms of show business and comedy. I'm grateful just to get to work with them again because they’re both brilliant guys. I really appreciate their allowing me to be funny in the movie.

KW: Yeah, it's like a reunion for you, because you worked with both of them earlier in your career.

KW: Bobby Shenker wants to know which character you’ll be playing in Death at a Funeral?

TM: My character's one of the close friends of the family.

TM: [Thinks about it] No, reporters ask you pretty much everything. They've pretty much covered the bases with me.

KW: I loved your Golden Globes acceptance speech. How did you come up with the idea for what you said?

TM: It wasn't pre-planned or anything like that. It was just a speech that came from the heart, and I just wanted to share how I felt at that moment.

KW: Bobby Shenker also had a couple of questions about 30 Rock. He asks how working on it is different from SNL and what it's like working with Tina Fey and Alec Baldwin?

TM: First of all, it's prime time and single camera. We tape it everyday, while SNL was live. As for working with Tina Fey and Alec Baldwin, I had already worked with both of them on SNL.

TM: Yeah, I'm afraid sometimes. I'm a human being. I feel all the emotions. I think it's good that I get scared, because if you never get scared, you don't have any need for guts.

KW: Teri Emerson would like to know, when was the last time you had a good laugh?

TM: The last time I had a good laugh? Hmm’ [Pauses to reflect] I'd have to say the last time I read something about me that wasn't true in the [New York] Post.

KW: The music maven Heather Covington question: What music are you listening to nowadays?

TM: I'm not much of a reader. I don't read books. Most of the time I'm reading people, because I'm from New York City.

KW: Are you from Brooklyn or the Bronx? I've read articles saying both.

KW: I went to high school in Bed-Stuy near Nostrand Avenue and Eastern Parkway.

KW: What has been the biggest obstacle you have had to overcome?

TM: Racism! The politics of it, man. More than the racism, the politics. And there's politics in any and everything.

KW: Rudy Lewis question: Who's at the top of your hero list?

KW: I'm sorry to hear that. The Laz Alonso question: How can your fans help you?

TM: By just laughing. They don't have to do much. Just open up and laugh.

TM: What do I see when I look in the mirror? I see Tracy Jamal Morgan. I see my history, I see my present. And I like to think I'm looking at the future. I'm looking forward to the future, because I have a lot to look forward to.

KW: What is your favorite meal to cook?

TM: Don't follow in my footsteps. Make sure to blaze your own trail.

KW: How do you feel about Barack Obama's becoming President of the United States?

KW: How do you want to be remembered?

KW: ’Realtor to the Stars' Jimmy Bayan was wondering, where in L.A. you live?

TM: Absolutely! Why would I ever let that go?

KW: we're out of time, but I had so much more ground I wanted to cover with you.

TM: Look, you're not going to find out everything about me in one interview, dude! I'm 40 years-old. It would take you 40 years. I think we're good.

KW: True, I appreciate the time, Tracy. Thanks.

TM: I appreciate it, too.

KW: Best of luck with the film.

Tracy Morgan - The "Cop Out" Interview with Kam Williams
http://aalbc.com/reviews/tracy_morgan_the_cop_out.html

A trailer for G-Force: