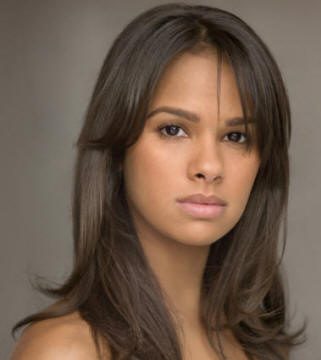 Born in Kansas City, Missouri on September 10, 1982, Misty Copeland is a soloist at the American Ballet Theatre. A recipient of the Leonore Annenberg Fellowship in the Arts, Misty is also an inductee into the Boys and Girls Club Alumni Hall of Fame. She lives in New York City. Here, she talks about her memoir, ‘Life in Motion: An Unlikely Ballerina.”

Misty Copeland The “Life in Motion” Interview
with Kam Williams

Kam Williams: Hi Misty, thanks for the interview. I really enjoyed your autobiography.

KW: What inspired you to write it at such a young age?

MC: I didn’t expect it to happen this soon, but it seemed like the right time when I was approached by Simon and Schuster, based on the way it was presented to me. It wasn’t going to be an end-all to me career, like “This is what I’ve done.” Rather, it’s more focused on how I feel about all my experiences in life and what I’ve learned from them, while I’m still in the midst of my career. So, it’s almost like I’m sharing that, inviting people into my world and bringing them along on a journey that I’m still on.

KW: You suffered a half-dozen stress fractures in 2012. Did having the time to write while recuperating play a part in your decision?

MC: Absolutely! [Chuckles] I had a lot of time recovering from my surgery.

KW: The book is so well-written and you were so forthcoming that I already feel like I know you before speaking to you.

KW: You didn’t begin with ballet until you were 13, and yet you’ve made it all the way to the top of the profession. That’s almost unheard of! How hard was that?

MC: It’s extremely difficult, and not an approach I would recommend. But, at the time, I didn’t grasp what it was I was doing. It was just fun, it came naturally to me, and I enjoyed learning something new every single day. So, I didn’t think of it as difficult at the time.

KW: In the book, you talk about being blessed with a perfect ballerina’s body. Still I think of 13 as being around the age when most girls give up ballet.

MC: Yeah, definitely. My body was ideal for ballet at that time. I was also a very late bloomer in every way in my maturity. So, I was very much a little girl when I started ballet.

KW: Harriet Pakula-Teweles asks: What is your favorite role as a ballerina?

MC: I believe I am yet to dance my favorite role, but I am pretty open to adapting to different characters. Right now, I’ve really enjoyed doing the role of Swanhilde in Coppelia. I’ve had a great process so far finding the character and learning the steps. But I would love to be Odette/Odile in Swan Lake one day. I think that would be the ultimate role.

KW: Do you think audiences still expect the Swan to be played by a white female?

MC: I think that’s most people’s expectation and ideal, because that’s what they’ve always seen in ballet. It’s almost a subconscious thing that makes them think that only a white woman could portray that role. But she’s a swan, she’s a character, so I believe she can be any color.

KW: In the book, you have a recurring theme where you say, “This is for the little brown girls.” What do you mean by that?

MC: I feel like I represent every young dancer, and even non-dancer, who felt they were not accepted by the ballet world. I’d like to think that they can see themselves in me. So, every time I made that statement, I was sort of saying, “I’m doing this for you, so it will be easier for you.”

KW: You remind me a little of Venus and Serena Williams in how you came from a humble background. They learned to play tennis on public courts in L.A. and you were introduced to ballet, not at a prestigious program, but at your local Boys and Girls Club, also in LA. How did you manage to fare so well without any formal training before your teens?

MC: I think I always felt a connection to music and to movement. Growing up, I was surrounded by R&B and Hip-Hop, and the closest thing I could find to dance was gymnastics which I watched on TV. So, I just used those avenues I found available right in my milieu to express what was inside of me. Ballet was exactly what I was searching for, but my environment definitely made me the dancer and the person that I am today. And the Hip-Hop culture was a big part of it.

KW: What did it feel like to be ignored by the white ballerinas in your dance company when you arrived in New York at the age of 16?

MC: I felt isolated because I didn’t know what the reason was at that age. My being black had never been talked about in the studio where I trained in California. I was just another dancer. When I moved to Manhattan, I first thought I was being singled out because I had trained for such a short period of time. But I was the only black girl.

KW: What did you think of two popular ballet movies: Black Swan and The Company?

MC: The Company was interesting. I didn’t love it, although it might be compelling to someone who isn’t a dancer. There wasn’t a lot of dialogue, and you were just kind of observing the creative process of choreography and in class. My reaction to the film was, well, this is my everyday life which is not that interesting to watch up on the screen. However, Black Swan, I did enjoy. It was super theatrical and over the top. Plus, I’m a Natalie Portman fan. I wouldn’t say it was realistic, but I found it very entertaining.

KW: Harriet also asks: How much is your dancing a role influenced by the music—and do you have a favorite composer whose music just lifts you that much higher?

MC: I love Philip Glass. It’s so complicated, if you really listen to it. There’s so much happening in his music, yet there can be movement created that’s such a contrast to it, that makes for a very pleasant experience when you see dance with it. Yes, I’m definitely influenced by the music. We dance to music, and you have to listen to it, and phrase your dancing and movement in a certain way to compliment the music. We have to work hand in hand, the dancer and the music. It depends on how I’m listening to the music to make it work not just with the music but with the character I’m playing, because when you’re dancing, you have to act out mime, which tells the story. And the music reflects that mime. So, they kind of work together.

KW: Editor Lisa Loving asks: Who was your biggest influence?

MC: In the ballet world, I definitely have to give credit to Paloma Herrera, because I idolized her in my early years of training. She was everything for me. Then, getting to be in the company alongside her, to be able to face my idol and dance with her on the stage, was just amazing!

KW: Lisa also asks: What is the most surprising thing people should know about you?

MC: I think I’m pretty laid back. I like cooking, being at home, and going to concerts. And I love to shop!

MC: I make a good salmon dish in the broiler that I marinate from scratch with orange juice and soy sauce and scallions. I love fish!

MC: Oh, I love Helmut Lang! I love Stella McCartney and Diane von Furstenberg and Christian Louboutin shoes. I love too many designers!

KW: Speaking of shoes, I was surprised to learn from your book that a good pair of ballet shoes costs around $80.

MC: It takes a lot of money to be a part of the ballet world. Both the training and the supplies are expensive, the shoes, the leotards and the tights.

KW: I was also fascinated by the fact that your knees curve backwards.

MC: We call it hyper-extended. They’re beyond straight. And that creates a very pretty line in ballet.

MC: I can’t think of one. [LOL] I’ve been asked a lot of questions throughout my career.

KW: Would you like to say something controversial that would get this interview tweeted? 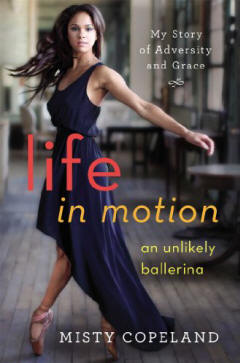 KW: The music maven Heather Covington question: What was the last song you listened to?

MC: On my way here, I listened to “Worst Behavior” by Drake. [Laughs]

KW: The Mike Pittman question: What was your best career decision?

MC: Deciding to dance the part of the Firebird, even though I had six stress fractures.

MC: To have American ballet look like the rainbow.

KW: The Jamie Foxx question: If you only had 24 hours to live, how would you spend the time?

MC: Playing with my siblings at about 5 years of age.

KW: The Anthony Mackie question: Is there anything that you promised yourself you’d do if you became famous, that you still haven’t done yet?

MC: No. I don’t think I’ve ever thought of that.

KW: The Melissa Harris-Perry question: How did your first big heartbreak impact who you are as a person?

MC: I think anything that affects me in my personal life is going to help me be a better artist on stage.

KW: The Viola Davis question: What’s the biggest difference between who you are at home as opposed to the person we see on the red carpet?

MC: I definitely like to be natural and more relaxed and not wear a lot of makeup.

KW: The Anthony Anderson question: If you could have a superpower, which one would you choose?

KW: The Judyth Piazza question: What key quality do you believe all successful people share?

KW: The Gabby Douglas question: If you had to choose another profession, what would that be?

MC: To surround yourself with people who care about and support you. And to do it for yourself and because you love it.

KW: The Tavis Smiley question: How do you want to be remembered?

MC: For making a positive change in the ballet world.

KW: Thanks again for the time, Misty, and best of luck with both the book and with ballet. Now, I’m going to have to come and see you perform.