A year ago this summer Hollywood witnessed the emergence of the "Original Kings of Comedy. "In the publishing world around the same time Carl Weber emerged with his first book, "Lookin for Luv," which had readers dubbing him the original king of drama, drama and more drama.

"Lookin for Luv," the first title released by Dafina Books, a new imprint of Kensington is what Weber believes many book buyers are looking for. And he should know, as we sat down to chat in the African American Bookstore, Weber simultaneously answered interview questions while talking to his regular customers.

That weekend Eric Jerome Dickey was scheduled to visit the bookstore’s Gertz Mall location. The Gertz mall store is one in a chain of bookstores Weber owns in the metropolitan area. One woman said she wouldn’t make the reading, but wanted very much to meet Dickey and have her book signed. "Drop it off on Friday," Weber told her and offered to make sure the book was signed and returned.

Even while he’s got what many writers dream of including a contract with a major publisher and a following of readers who are eagerly looking for his next book to hit the shelves, anyone can see just by spending time in his store that Weber truly loves selling books.

Weber got his start as a book retailer over seven years ago while he was a business teacher on Riker’s Island. At the time his background was mainly in accounting and finance. One assignment he gave to his students was to create a business model for a bookstore. After giving the plan a whirl, he found it actually worked and the African American Bookstore was born first as a mail order business. The Queens store where we met that day in June has been around for about four years.

So in looking at the breadth of Weber’s experience, one can definitely see a connection between his background in finance and his current business but when and how did the creative side come into play? Weber, who reads on average three books a week, says he decided to try his hand at writing after many of his customers told him that there weren’t many books out there that they liked to read. And what kinds of books are those? Books filled with page after page of pure, unadulterated drama.

And "Lookin for Luv" appears to be just that. It’s the story of three men who resort to finding the women of their dreams by calling a 1-900 number. The critics are calling Weber’s first novel "obnoxiously funny." One reader described "Lookin for Luv" as a "wonderful break from the daily struggles," mirroring what Weber says the reading audience is looking for, a chance to deal with other people’s problems. 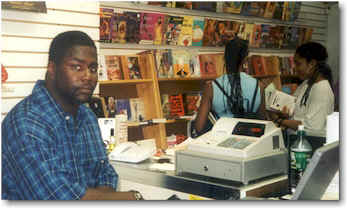 Carl Weber, in his African American Book Store
(Editor’s Note: Weber sold his interest in this store in 2003)

Weber, who said English class wasn’t his strength when he was in school, learned how to write by studying the work of other authors. To create dialogue Weber said he writes conversations the way he hears people speak. And one element that he feels is essential in telling his stories is to have what he calls a good villain or "someone you can hate."

And the drama continues. In addition to running the African American Bookstore, Weber plans to write a book a year. Weber’s next book "Married Men" is scheduled to be released in September. The book’s cover promises the audience "a rowdy romp through sleazy hotels, divorce court, jail…strippers, trippers, psycho ex-football players and stuff too freaky to mention." "

But what about other literary critics who feel that Weber’s work is Jerry Springerish?

"Yeah it is," Weber said unapologetically. "We have to realize that not everything is going to be Toni or Cornell West."

The best selling author is quoted widely regarding his knowledge of the publishing industry which he first honed as a book retailer. In a recent article appearing in the New York Times Weber touted the book "Addicted by Zane" as the "hottest paperback in the country." Weber was also named as the Blackboard Bookseller of the year in 2000 and he says even as he continues to write, he’ll also continue to sell books. "I can’t forget where I came from," he said. "I’ll never give up the store."