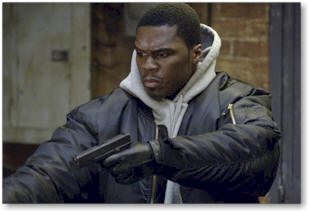 Born Curtis James Jackson, III in South Jamaica, Queens on July 6, 1975, 50 Cent has eclipsed his mentor Eminem as the pre-eminent gangsta’ rapper of the day. Like Marshall Mathers did with 8 Mile, Fitty decided to make his feature film debut by keeping it real with a semi-autobiographical docu-drama.

Get Rich or Die Tryin’, which was directed by Jim Sheridan and co-stars Terrence Howard and Joy Bryant, chronicles the efforts of an orphan-turned- drug dealer to extricate himself from a dead-end life on the streets to pursue a hip-hop career.

Kam Williams (KW): How did you find it making your first movie?

50 Cent (50): I kinda’ prepared myself prior to comin’ there. I made sure I knew all the dialogue and everything. And I’m always on time with the things I’m supposed to do.

KW: Did you find it a challenging experience?

50: Sometimes it was freezing out there in Toronto, Canada. I felt that we coulda picked a place better than this.

KW: How about emotionally, given that it’s your life story?

50: Actually, shooting the scenes, for me, wasn't that difficult, because it actually happened different from what I experienced. I was just concentrating on making sure my physical performance as the shots were going off were accurate. And now when I look back at it, I think I did a great job.

KW: isn't this supposed to be autobiographical?

KW: What about the death of your mother?

50: The scene with mother actually wasn't done accurately. My mother’s situation was someone put something in her drink, and then turned on the gas to cut off her oxygen.

KW: What were the hardest scenes to shoot?

50: The difficult points was rapping like I didn't know how to rap, and being believable at that point. When we got to those scenes, I just kinda’

made up stuff. Then I had to remember it, because we did it over and over a few times.

KW: Why is it that whenever your name comes up, the first thing that people seem to talk about is the fact that you were shot nine times?

50: That’s because they’ve heard the story over and over through different media outlets and different publications. They’ve never heard me say, ’You know what? I been shot.’ I don't never bring it up

KW: Then why does the media continue to focus on that aspect of your past?

50: I think it’s something that they find some significance in, and ask me questions about it. I think it’s because a lot of the people interviewing me haven't been subjected to those things. They’re not actually from an environment where those things happen. And they’re intrigued by it. Since I’ve been touring, I’ve been places where there’s next to zero gun violence, where the police officers don't even carry guns. I said, ’What?’

KW: Do you consider your scars a sort of red badge of courage that gives you street credibility?

50: Me? I think it’s unfortunate to have to experience something like that.

Or even be close to it.

KW: How do you respond to those people who complain about what they see as harmful messages being delivered by gangsta’ rap?

50: There are more standards placed on music as an art form than are place on any other forms of entertainment. We haven't seen a gun or a weapon on the cover of a CD that was distributed by a major record company since probably 1987, KRS-One’s Criminally Minded.

KW: I did not know that. In some cities, like Philly local activists have successfully lobbied to have the billboard for this movie taken down, because it shows you holding a gun in one hand, a microphone in the other.

50: We probably see weapons used to market other film projects, more than we see people’s faces. Nobody has a problem with that. But as soon as they see me with a gun on a billboard, they go, ’Oh my God, this is promoting violence. This is dangerous.’

KW: Why do you think that happens?

50: They believe the possibilities of me doing something wrong are higher, because they’ve had references to rappers being in shootouts, or being shot in situations, but they don't realize that these people still live in the environment where this goes on. So, when they go home to it, they are subjected to the same things that are there, where the price of life is cheap.

KW: What do you think of Samuel L. Jackson decision not to compromise his integrity by making movies with gangsta’ rappers?

50: That was actually good, if he was looking for press. Samuel Jackson is the special case of a person who forgets that he is in the entertainment business. Some people go to college for acting and everything, but because no one knows them, they’re not a better business deal than it is to make a film with 50 Cent. I sold 11 million records for my first album. And for everyone who bought it, there was someone who stole it. So, you got to say I’m generating the interest of maybe 22 million people.

KW: Would you make a movie with Sam if he changed his mind?

50: I’m not upset with him, but I don't see where he would actually fit into my film, outside of playing my grandfather. His last two films [Star Wars and The Man] actually sucked. He should have brought some of that integrity to the last two that he did.

KW: Rappers always seem to be proud of keeping it real. Would you say that money has changed you at all?

50: Anyone who tells you that money don't change you, just didn't make enough.

h my father. His life is different, based on I’ve been able to provide a different environment for him to grow up in. He’s still been altered by some of the scenarios and situations that I’ve been through.

50: He actually was in the house when I got shot.

KW: Did he see you wounded and bloody? That must have been traumatic?

50: No, he heard the shots go off, but he never saw me. He just seen me in the hospital after.

KW: Do you spoil him?

50: I can give him more than I received as a kid and not overdo it. I try not to overspoil him. He can't have any and everything he wants. He doesn't ask for much. It doesn't take much to really make him happy. That’s it.

KW: Thanks for the time.

Movie Review of The Get Rich or Die Tryin’
http://aalbc.com/reviews/get_rich_or_die_tryin.htm

Jim Sheridan, Director of  Get Rich or Die Tryin’
http://aalbc.com/reviews/jim_sheridan.htm