New Hair-do is a “Natural”
by Connie Bradley 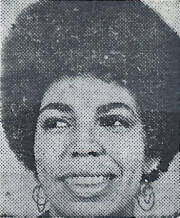 I finally succumbed. If someone had told me a couple of years ago that I would appear in public with my crowing glory in its natural state, I would have, you should excuse the expression, flipped my wig!

I had been very vociferous opponent of “colored women wearing their hair in that ridiculous way,” and I had at my command a variety of arguments against the au naturel coiffure.

It was exhibitionistic. It had no authentic significance in Afro-American heritage. It looked awful.

I was totally miffed at those avant-garde black women for betraying their sleekly groomed sisters by reminding the world how Negro hair really looked. But they were doing just that in increasing numbers.

SUDDENLY, THE “NATURAL” was in. Everywhere I looked, I saw it: on comely black TV stars lettin’ it all hang out, on militant black sisters tellin’ it like it is, on chic black matrons doin’ their thing. And there I stood with all the wrinkles ironed out of my hair!

Had the world gone mad? Was this fright hair-do all part of a Red plot to filter black brain waves? “No, Baby.” A groovy black brother informed me. “The natural is where it’s at.”

Never one to bypass being where “it” was “at”, I made a decision. I’d try a natural “ just for laughs. If anybody questioned my reversal, I’d confess I’d had a revelation. I’d give them a snow job about the intrinsic value of hair and come on strong about the importance of black people accepting their negritude.

Seeped in my hastily devised convictions, I shampooed and dried my hair, then stood before the mirror, armed for combat. I began to comb and comb and comb, watching as a metamorphosis took place, marveling as my plain round face gradually acquired a perfect frame a dark, curly halo that enhanced my features.

IT WAS AMAZING! My whole image had changed. The thick, bushy crop of hair I had long ago dismissed as being kinky had come into its own, free at last!