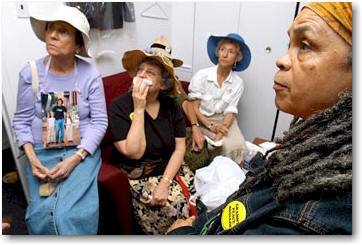 Philadelphia, PA: Sonia Sanchez, 71, and ten other grandmothers, who are part of an organization called The Granny Peace Brigade (GBP), were recently acquitted in a Philadelphia Community Courtroom on charges of 'defiant trespassing' in front of an Army Recruitment Center earlier this year.

The grandmothers, all of whom are against the war in Iraq, staged a peaceful protest outside a U.S. Armed Forces Center in downtown Philadelphia on June 28, 2006. While protesting, the women ’sang peace songs, spoke out against the war, and displayed colorful banners.’

They also chanted, "Take us, not Philadelphia's children and grandchildren. Let them live their lives." 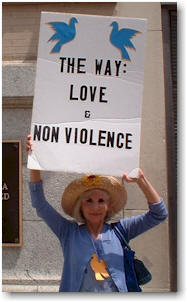 As a result, all of the women were arrested and detained. Their trial, which was set for December 1, 2006, lasted only fifteen minutes long, and drew thousands of supporters from around the world. The charges against them were dropped because they were protesting in a public building and exercising their right to free speech.

’What are we grandmothers going to have to do, for God's sake, to try and wake up America?’ asks Joane Wile, Founder and Director of Grandmothers Against the War and a member of the GBP.

’The anti-war movement must get ever more creative and determined,’ says Wile. ’New methods of protest must be developed. Larger numbers of people must be engaged. New leaders must emerge.’

Wile believes that perhaps, most importantly, ’the youth must be aroused to leave their insulated comfort zones (their video games, their rock concerts) and come out and speak against the Bush atrocities.’

The Granny Peace Brigade was actually born on October 17, 2005, when 18 women, ages 59 to 91, many of them grandmothers, tried to enlist in the United States military. They asked to enlist in order to replace their grandchildren who they believed were being ’deployed in Iraq unnecessarily.’

As one ’Peace Granny’ asserted, ’We wanted our young people to come home while they were still alive and whole, to have the same opportunity for enjoying a long life as we have had.’

The grannies, however, were denied access, arrested, and jailed. After a six-day trial, they were acquitted of all charges, ’which was an affirmation of the legality of non-violent protest.’

Sonia Sanchez, herself a peace activist, notable poet, and proud grandmother, heard about the GPB and decided to join the Philadelphia chapter. 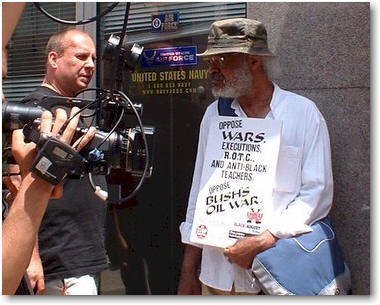 Peace is necessary for the survival of this planet. As water is to life, human beings need  peace in order to ensure the righteous development of  our young people. The earth needs peaceful warriors with the spirit of Sojourner Truth, Harriet Tubman, and Fanny Lou Hamer in order to ensure that generations after us will not buckle when their basic human rights have been taken away. Future generations need to be inspired to know peace, breathe peace, speak peace, and be the peace that they want to see in the world. They must know that their grandmothers, grandfathers, mothers, sisters, fathers, and brothers are inspiring them to take up the torch and follow their precious lead.

"These grandmothers are actively looking at ways to move towards peace for future generations,’ says Kadija Sesay, a literary activist who was present at the trial. ’It's wonderful that our elders should do that, and it was great to see that a lot of the younger generations were there to support them.’

The grannies have been traveling to various places in the United States, promoting peace and garnering support for their efforts through their website: grannypeacebrigade.org. They are willing to put their lives on the line in a quest to save human lives.

Presently, they are calling upon all grandmothers to join them on January 18, 2007 in Washington, DC, as they meet with senators in hopes that the new 110th Congress will ’honor the mandate of the electorate, act with integrity, and restore the basic tenets of our Constitution.’