New York: Poet Sonia Sanchez celebrated the release of her new CD called The Full Moon of Sonia (V.I.A. Recording Artists 2004) at The Tribeca Performing Arts Center in Lower Manhattan, New York on Friday December 17, 2004. Countless Sanchez supporters and followers from around the country came out to hear Sanchez perform with a live jazz band, a host of beautiful dancers, renowned guest artists, and phenomenal back-up singers, who strummed their sweet music around Sanchez's words of peace, love, and freedom. 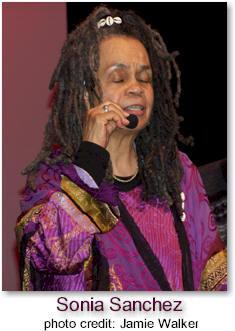 Much like her performance in Atlanta, Sanchez's New York premiere was lively and entertaining, featuring smooth, arresting vocals that combine beautifully with rootsy, soulful beats that are, at once, unifying and liberating, a testament and tribute to jazz and the blues.

Joanne Veal Gabbin, a Sanchez scholar and Professor of English at James Madison University in Harrisonburg, Virginia, was invited to co-host the New York performance, as well as ’a discussion with actor Danny Glover and Nobel Prize-winning novelist Toni Morrison.’

Both Glover and Morrision were selected along with twenty other well-known artists to be members of the host committee for the ’Full Moon’ concert.

According to Woodie King, Jr., renowned playwright and editor of several anthologies featuring Sanchez's poetry and plays, Tom Jones and his sister, Diana Stevens (executive producer of V.I.A. International Artists, Inc.), contacted over twenty people to be members of the host committee.

’I thought it was a great way to promote the event,’ King said. 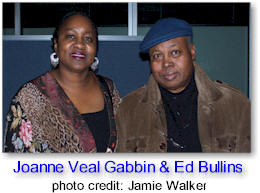 Ed Bullins, also member of the host committee, anthologized many of Sanchez's early plays, including Sister Son/ji (1972), which starred the late Gloria Foster, and Uh, Huh: But How Do it Free Us? (1970). Both plays are featured in two anthologies edited by Bullins called The New Lafayette Theatre Presents: Plays with Aesthetic Comments by 6 Black Playwrights (Anchor Press 1974) and New Plays from the Black Theatre: An Anthology (Bantam 1969), respectively.

Bullins, who has known Sanchez for over forty years, remembers working with the prolific poet (as well as Amina and Amiri Baraka) in the late 1960s at The Black House Theater in San Francisco, California.

’Sanchez used to offer playwrighting workshops there,’ said Bullins, who considers Sanchez to be ’a very capable playwright,’ a profound human being and talented artist ’who has always been a teacher to us.’ 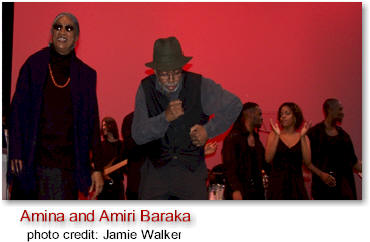 When asked what moves him, particularly, about Sanchez's poetry, Bullins responded: ’Her daring . . . the depths of it . . .  the accomplishment of making her own form in poetry. [Sanchez] is not afraid of danger.’

And Bullins is correct. Sanchez is not afraid to go against the grain, to expose the truth and the lies, to speak truth to the spiritual and cultural needs of the people. Sanchez teaches us how to love ourselves whole in a country that would have us ignorant about our self-worth, a country that would lead many of us to believe that African Americans are inferior and self-destructive.

With her poetry, however, Sanchez raises the consciousness level of all people. She calls the community back to conscious re-memory of their rich African heritage and past. Always trying to find a way to bridge the generations, Sanchez teaches us what it means to be human on this planet and to live righteously in a world that does not discriminate based on race, gender, religious affiliation, sexual orientation, or socio-economic background.

Carole Gregory, Professor of English at the Borough of Manhattan Community College in New York, claims she's been teaching Sanchez in the classroom since 1971. Gregory says she first discovered the words of Sanchez in the pages of Black World magazine (formerly known as The Negro Digest).

Gregory says she enjoys teaching Sanchez to young people not only because of her ’strong anti-drug themes,’ but also because ’Sanchez is a language treasure.’

Sanchez is a fierce, resilient Black woman, mother, activist, and poet, who, along with several members of the Black Arts Movement, sounded a new day in America with the creation of a distinctly Black poetry that spoke to hearts and souls of the urban masses.

Professor Gregory, who was present at the New York premiere of ’Full Moon,’ said, ’Sanchez's performance portrayed the sunshine of our spirits in this American hell.’ 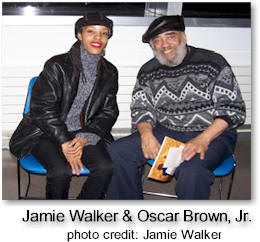 Oscar Brown Jr., who was also member of the host committee, praised Sanchez's spirit and poetry after performing a gripping musical number on stage with her about the horrors of slavery.

While Sanchez read her moving, soul-stirring poem about the middle passage called ’Improvisation,’ which is featured in Wounded in the House of a Friend (Beacon Press 1997), Brown sang a dramatic, soulful, heartfelt rendition of ’Afro Blue’ in the background.

Brown claims he and Sanchez chose ’Afro Blue’ as a background piece to ’Improvisation’ because ’it painted a language . . . a beautiful, loving picture of the horror Sanchez is talking about in her poem.’

Brown said, ’It's like fingers scratching the blackboard. It has that kind of . . . oooh [feeling]. I think the contrast worked startlingly well.’

The contrast worked ’startlingly well’ because it spoke of the resilience and beauty of the souls of black folk, who have continuously triumphed over set-back and defeat in America.

Much like her immaculate performance on stage with singer Toshi Reagon (daughter of Berniece Reagon from ’Sweet Honey in the Rock’), Sanchez's hip poem about peace that she performed live with Amiri Baraka was equally entertaining.

Oscar Brown, Jr. said, ’I thought Sanchez's performance with Baraka was hot!’  Brown, who also enjoyed Amina Baraka's inspiring poetic-song in praise of Sanchez, claimed, ’Everyone did terrific. The choreography was hot . . . the vocals . . . just the whole show! It was hot.’ 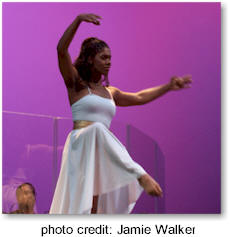 Hot, indeed, especially considering the young talent Sanchez featured on stage from such places as the Harlem Heritage Theater.

Brown, Jr., whose currently working with young people from Chicago in a revival of his 1983 hit musical called Great Nitty Gritty said, ’I was inspired tonight by what some of these kids did. I thought we were hot in Chicago. But they got some hot stuff going on here in New York.’

Joseph Nyerere, a Brooklyn native and follower of Sanchez for over forty years, agrees.

He says the young and old alike are attracted to Sanchez's poetry because it is filled with ’consciousness and energy.’

’Everything Sanchez does is with energy,’ said Nyerere. ’She is committed and she will be on the battlefield until she dies.’

Sanchez, who is currently working on her memoirs, will remain on the battlefield fighting for us all. Her new CD, ’The Full Moon of Sonia,’ is not only a testament to these words and songs of praise, but also a healing reminder about the collective sounds of a people, who are continuously encouraged by this poet to resist and rise above insurmountable obstacles and odds by any means necessary.