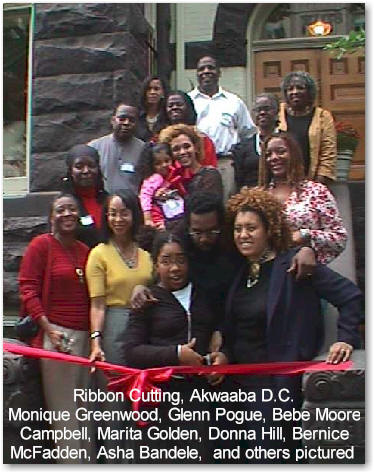 Washington, D.C.: Hundreds of book lovers (in addition to a host of best-selling authors, literary activists, and media personnel) joined Monique Greenwood, author and former editor-in-chief of Essence magazine, along with her husband, Glenn Pogue, Saturday October 11, 2003, for the grand opening of Akwaaba D.C. Inn.

Akwaaba, which means "welcome" in a language spoken in Ghana, West Africa, is located at 1708 16th St., N.W., in Washington, D.C., and situated in the landmark Dupont Circle area of the nation's capitol. Just minutes from Metro, fine restaurants, shops, a quick tour of the White House or national mall, Akwaaba D.C. is a stroll away from the historic "U Street," where legendary African American authors and jazz musicians from the Harlem Renaissance frequently performed, networked, and convened.

Personally decorated by Greenwood (along with the help of Kuumba Home Staging & Design), Akwaaba D.C. is blessed to feature the artwork of Gilbert Fletcher, author of Painted Voices: An Artist's Journey into the World of Black Writers, whose memorable, colorful paintings of African American authors like Alice Walker; Sonia Sanchez; Gwendolyn Brooks; Robert Hayden; James Baldwin; and Zora Neale Hurston adorn the walls.

Greenwood transformed the 1920s brownstone (which is sister to two other Inn's she owns in the historic Stuyvesant Heights section of Brooklyn and Cape May, New Jersey) into a stunning five-story bed and breakfast that has a total of eight guest rooms (each with their own private baths); a "self-contained writers retreat" apartment suite; an innkeepers apartment; and a "grand parlor, center hall and formal dining room."

Greenwood, who refinished the floors on the parlor level, and re-installed the original hardwood front door, claims she designed each room (complete with antique treasures to complement the "contemporary furnishings") with the spirit of the authors in mind. 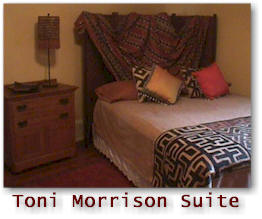 Patrik Henry Bass, the books editor for Essence magazine who co-authored In Our Own Image: Treasured African-American Traditions, Journeys & Icons (Running Press 2001) with Karen Pugh, says he fell in love with The Langston Hughes Suite because Hughes is his favorite author.

"I actually became a writer in part because of Langston Hughes," Bass said. "I used to read his poetry when I was in elementary school. I didn't know that there were any other writers besides Langston Hughes." Bass laughs, "But that was okay with me. Langston Hughes was enough. You know? In many ways."

Alberta Gaskins, a self-titled "life-time volunteer" for The National Congress of Black Women, and Desiree Urquhart, Associate Executive Director of the Arena Stage Theater in Washington, D.C., absolutely adored The Zora Neale Hurston Suite. Both women (like many in attendance) found out about Akwaaba D.C. via email and word-of-mouth.

"The reason why I particularly like this room," Urquhart says, "is because two years ago Arena Stage did a lost play of Zora's called Polk County that we found in the archives of The Library of Congress. Zora and I have a lot in common in that we both like to live life out loud and this room speaks to living out loud. It's so big. It's Zora."

Urquart continues, talking about the significance of the Inn being located in the heart of the nation's capitol: "This is Washington, D.C., the center of power. And power not only stems from one's ability to be able to orate, but also to be able to write. Zora was a woman before her time who seized power of her own through the pen. And she loved people--exploring them anthropologically and just giving us who we are in the dialect of her time."

Urquart explains, "Being in this space today in 2003, in Washington D.C., says 'Here is a place where powerful people who know how to live out loud can be here to relax; to create; to be all they can be; right in the center of power.' I love it."

"I thought that was really wonderful," Hill said with a smile. 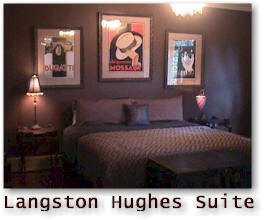 Pamela Newkirk, author of A Love No less: More than Two Centuries of African American Love Letters (Doubleday 2003), was invited by Greenwood to cut the ribbon in front of The Romance Suite. Newkirk, who teaches journalism at New York University, did a profile on Greenwood "many years ago" that was featured in The New York Times when Greenwood "opened her first bed and breakfast in Bed-Stuy."


"[Akwaaba D.C.] underscores the richness of the Black literary tradition," said Newkirk. "This place will do so much to inspire the next generation of writers."

Asha Bandele, a poet and author most remembered for her beautiful memoir, The Prisoner's Wife (Simon and Schuster 2000), is currently touring the country with her new novel Daughters (Scribner's 2003). Bandele says, "Monique actually hired me at Essence magazine years ago when she was editor-in-chief. We had a very close relationship and very close bond so she called and asked me if I would come and cut the ribbon on the poetry room."

She also said, "I think [Akwaaba D.C.] is in the tradition of all of the things that Monique has been doing, which is reclaiming the Black community and the best tradition of our elders and ancestors; saying that we don't have to always go to the white community to have the finer things--the most beautiful things in life." Bandela said, "[Monique] revitalized entire neighborhoods in Brooklyn. And I have the feeling that she'll do that here as well. There was a time when we did, very much, run and control our own stuff. And then a lot of that fell apart. But I think Monique is part of those group of people [who are] bringing it back together about Black ownership and self-definition and self-determination."

Bandele's quote echoes an earlier comment from Patrik Bass, loyal friend and supporter of Monique and Glenn, who explained, "I think this [place] is incredible. It's groundbreaking. It's the watershed moment because the Harlem Renaissance was about community and I think that this is the first step in terms of building community. There is a great community, literary community, in Washington, D.C. and now they have a place--people from all around the world now have a place--to come; African Americans and others who want to find their voice; get renewed; replenished; people who want to write; people who love words."

Bass concludes, "[Akwaaba D.C.] doesn't have to be about writers. It can be for book lovers, too. I think that's the great thing about literature is that it gives us a chance for introspection." 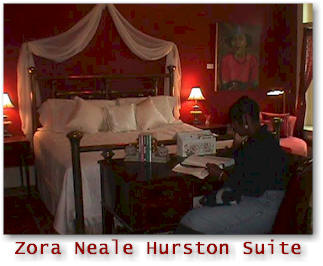 Vanesse Lloyd-Sgambati, a literary publicist who traveled all the way from Philadelphia, PA to participate in the launching of Akwaaba D.C. says she loves the bed and breakfast Inn because "it is dedicated to a theme." She says, "A uniqueness about this is that it's quality. [Greenwood's] preserving architectural details, but also keeping the integrity of all of the 'A' level authors."

Lloyd-Sgambati, who (like Lonnae Parker of The Washington Post) loves The Toni Morrison Suite that it is decorated with African fabric and designs, notes that Greenwood, herself an author of book called Having What Matters: The Black Woman's Guide to Creating the Life You Want (Amistad Press 2002), is also supportive of "up and coming authors."

Reginald Dunlop, a new client of Lloyd-Sgambati, is a pilot for United Airlines who recently self-published his first novel, Love Notes. Like many authors in attendance who plan to give book readings, signings, or workshops twice monthly, free of charge, at the Inn's "gracious parlor," Dunlop believes Akwaaba D.C. provides an excellent opportunity for those writers who need a place to write.

Room rates range from $135 to $190 and include "an expanded gourmet continental breakfast and afternoon refreshments."

Stanice Anderson, whose book I Say A Prayer For Me: One Woman's Life of Faith and Triumph (Warner Books/Walk Worthy Press 2003), is featured in The Inspiration Suite (along with "natural body products" made by an African American owned company, Warm Spirit), confides, "To have something right in this town is awesome. And right at our disposal. This place is about books. There are a lot of intellectuals here. There are a lot of people who just like to read. So this is perfect."

And Anderson is absolutely correct. Everything in Akwaaba D.C. is "exquisitely done."

This story has also appeared in The Amsterdam News and The Tennessee Tribune.