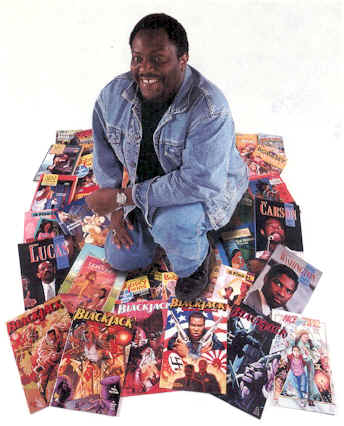 Creator/writer/publisher Alex Simmons, is no overnight success. For many long days before BLACKJACK, Simmons wrote a number of juvenile mysteries under a variety of pseudonyms for many well-known publishers; several stage plays; three movie novelizations for Disney; and three biographies for Steck-Vaughn, including one on Denzel Washington. He also created the "Clue Kids" series. Simultaneous to writing and publishing BLACKJACK, Simmons is also authoring "FUTURE FLASH" and "THE RAVEN LEAGUE". FUTURE FLASH, a sci-terror trilogy forth coming from TOR Books. THE RAVEN LEAGUE, chronicles the adventures of six street urchins who sometimes act as Sherlock Holmes’s. As if that wasn’t enough, he also wrote 12 inter-active mysteries for Tiger Toys new electronic game, "Who Done It,." which received three awards.