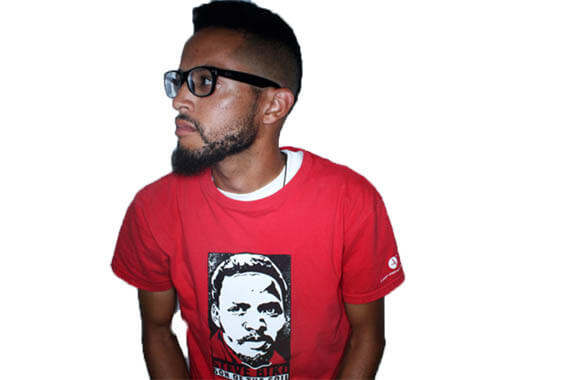 Chaun Webster is a Poet, Publisher and Graphic Designer in no particular order. Webster’s poetry finds its influences in the intersections of the Black Arts Movement and Jazz, the Concrete Poetry Tradition and Grafitti. July 2009 marked the launch of Free Poet’s Press, the small publishing company Webster began in order to create self-determining space for art production in Black and Brown communities. As guerrilla media FPP utilizes low-tech production methods and local distribution to disseminate radical ideas through the arts. In Osayande’s introduction to Webster’s debut book of verse, fuck poetry: bread is the politik of the hungry, he states, “At times his poems call for retribution and utter visions of battle-cries, bullets and blood. At other times they convey a palpable frustration of being powerless to defend against the everyday acts of violence by the ‘Leviathan’ that violates our senses, if not our very bodies, on the daily. At all times, they offer us an authenticity in expression and execution that leaves us inspired or convicted or both.”

Webster went on to be awarded a Verve Grant for Spoken Word Poetry through which he produced his HaiCOUP: a fieldguide in guerrilla (po)ethics, with Twin Cities Poet’s Marissa Carr, Ibrahima Kaba, and Jake Virden. Being determined to produce without having to depend on grant funding Webster raised funds through Kickstarter to release the RE-Scripted Chapbook Series garnering critical attention from Associate Professor of Communications at Morgan State University, Dr. Jared Ball who wrote the foreword saying, “RE-Scripted is anti-colonialism.” As of 2016 Webster, with his wife Vera Wong, operate the Ancestry Books pop-up store on weekends in Minneapolis, MN.