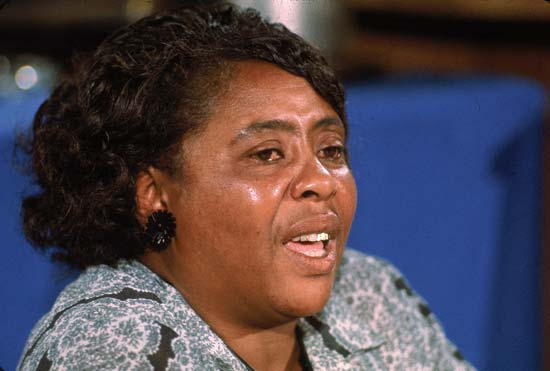 Fannie Lou Hamer (October 6, 1917 – March 14, 1977) was an voting rights activist, civil rights leader, and philanthropist. She was instrumental in organizing Mississippi’s Freedom Summer for the Student Nonviolent Coordinating Committee (SNCC), and later became the vice-chair of the Mississippi Freedom Democratic Party, which she represented at the 1964 Democratic National Convention in Atlantic City, New Jersey.

The Speeches of Fannie Lou Hamer: To Tell It Like It Is

Series: Margaret Walker Alexander Series in African American Studies
Paperback: 288 pages
Publisher: University Press of Mississippi (March 18, 2013)
Most people who have heard of Fannie Lou Hamer (1917-1977) are aware of the impassioned testimony that this Mississippi sharecropper and civil rights activist delivered at the 1964 Democratic National Convention. Far fewer people are familiar with the speeches Hamer delivered at the 1968 and 1972 conventions, to say nothing of addresses she gave closer to home, or with Malcolm X in Harlem, or even at the founding of the National Women’s Political Caucus. Until now, dozens of Hamer’s speeches have been buried in archival collections and in the basements of movement veterans. After years of combing library archives, government documents, and private collections across the country, Maegan Parker Brooks and Davis W. Houck have selected twenty-one of Hamer’s most important speeches and testimonies.

As the first volume to exclusively showcase Hamer’s talents as an orator, this book includes speeches from the better part of her fifteen-year activist career delivered in response to occasions as distinct as a Vietnam War Moratorium Rally in Berkeley, California, and a summons to testify in a Mississippi courtroom.

Brooks and Houck have coupled these heretofore unpublished speeches and testimonies with brief critical descriptions that place Hamer’s words in context. The editors also include the last full-length oral history interview Hamer granted, a recent oral history interview Brooks conducted with Hamer’s daughter, as well as a bibliography of additional primary and secondary sources. The Speeches of Fannie Lou Hamer demonstrates that there is still much to learn about and from this valiant black freedom movement activist.

This Little Light of Mine: The Life of Fannie Lou Hamer

Series: Civil Rights and the Struggle for Black Equality in the Twentieth Century
Paperback: 426 pages
Publisher: The University Press of Kentucky (August 24, 2007)
This book is the essence of raw courage. It must be read. —Rep. John Lewis

The award-winning biography of black civil rights activist Fannie Lou Hamer. Among the most important figures of the Civil Rights movement, Fannie Lou Hamer rose from difficult circumstances to dedicate her life to battling racism and poverty. Mills vividly recreates the optimism and excitement of the movement, as well as the tension, uncertainty, and danger faced by Hamer and her colleagues. Photos.

“Provides a history that helps us to understand the choices made by so many black men and women of Hamer’s generation, who somehow found the courage to join a movement in which they risked everything.” —New York Times Book Review

Freedom’s Daughters: The Unsung Heroines of the Civil Rights Movement from 1830 to 1970

“Women hold up half the sky” is one of Chinese revolutionary Mao Tse Dung’s most often quoted statements. However readers of Freedom’s Daughters: The Unsung Heroines of the Civil Rights Movement will conclude that the women it profiles held up far more than just half. Freedom’s Daughters examines with satisfying depth the complete spectrum of women’s contributions to the civil rights movement—from slavery to the turbulent 1960’s. The majesty of the 60 plus women profiled, and the magnitude of their efforts combined with the excellence of author Lynne Olson’s writing and research will leave readers enthralled.

Freedom Summer: The Savage Season That Made Mississippi Burn and Made America a Democracy

Freedom Summer: The Savage Season That Made Mississippi Burn and Made America a Democracy by Bruce Watson. The book is an account of the summer of 1964, also known as "Freedom Summer". Close to 1000 college students went into the belly of the beast of America’s most segregated state: Mississippi. The students were part of "Freedom Summer". In their quest to bring literacy, the right to vote and education to the black folks in Mississippi in order to break the back of the racism that enslaved them, the students’ efforts would forever change the fabric of America. I do not believe that I have ever been so informed and emotionally moved as I have been reading Freedom Summer. Freedom Summer is nothing short of brilliant.