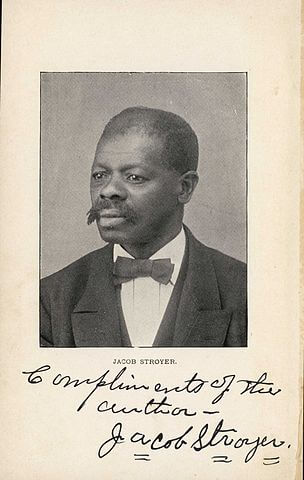 One of fifteen children, Jacob Stroyer was born on a plantation twenty- eight miles from Columbia, South Carolina, in 1849. After the Civil War he became an African Methodist Episcopal minister, serving in Salem Massachusetts.

Most of the cabins in the time of slavery were built so as to contain two families; some had partitions, while others had none. When there were no partitions each family would fit up its own part as it could; sometimes they got old boards and nailed them up, stuffing the cracks with rags; when they could not get boards they hung up old clothes. When the family increased the children all slept together, both boys and girls, until one got married; then a part of another cabin was assigned to that one, but the rest would have to remain with their mother and father, as in childhood, unless they could get with some of their relatives or friends who had small families, or unless they were sold; but of course the rules of modesty were held in some degrees by the slaves, while it could not be expected that they could entertain the highest degree of it, on account of their condition. A portion of the time the young men slept in the apartment known as the kitchen, and the young women slept in the room with their mother and father. The two families had to use one fireplace. One who was accustomed to the way in which the slaves lived in their cabins could tell as soon as they entered whether they were friendly or not, for when they did not agree the fires of the two families did not meet on the hearth, but there was a vacancy between them, that was a sign of disagreement. In a case of this kind, when either of the families stole a hog, cow or sheep from the master, he had to carry it to some of his family, for fear of being betrayed by the other family. On one occasion a man, who lived with one unfriendly, stole a hog, killed it and carried some of the meat home. He was seen by some one of the other family, who reported him to the overseer, and he gave the man a severe whipping….

No doubt you would like to know how the slaves could sleep in their cabins in summer, when it was so very warm. When it was too warm for them to sleep comfortably, they all slept under trees until it grew too cool, that is along in the month of October. Then they took up their beds and walked.

Gilbert was a cruel [slave] boy. He used to strip his fellow Negroes while in the woods, and whip them two or three times a week, so that their backs were all scarred, and threatened them with severer punishments if they told; this state of things had been going on for quite a while. As I was a favorite with Gilbert, I always managed to escape a whipping, with the promise of keeping the secret of the punishment of the rest….But finally, one day, Gilbert said to me, "Jake," as he used to call me, "you am a good boy, but I’m gwine to wip you some to- day, as I wip dem toder boys." Of course I was required to strip off my only garment, which was an Osnaburg linen shirt, worn by both sexes of the Negro children in the summer. As I stood trembling before my merciless superior, who had a switch in his hand, thousands of thoughts went through my little mind as to how to get rid of the whipping. I finally fell upon a plan which I hoped would save me from a punishment that was near at hand….I commenced reluctantly to take off my shirt, at the same time pleading with Gilbert, who paid no attention to my prayer….Having satisfied myself that no mercy was to be found with Gilbert, I drew my shirt off and threw it over his head, and bounded forward on a run in the direction of the sound of the [nearby] carpenters. By the time he got from the entanglement of my garment, I had quite a little start of him….As I got near to the carpenters, one of them ran and met me, into whose arms I jumped. The man into whose arms I ran was Uncle Benjamin, my mother’s uncle….I told him that Gilbert had been in the habit of stripping the boys and whipping them two or three times a week, when we went into the woods, and threatened them with greater punishment if they told….Gilbert was brought to trial, severely whipped, and they made him beg all the children to pardon him for his treatment to them.

[My] father…used to take care of horses and mules. I was around with him in the barn yard when but a very small boy; of course that gave me an early relish for the occupation of hostler, and I soon made known my preference to Col. Singleton, who was a sportsman, and an owner of fine horses. And, although I was too small to work, the Colonel granted my request; hence I was allowed to be numbered among those who took care of the fine horses and learned to ride. But I soon found that my new occupation demanded a little more than I cared for.

It was not long after I had entered my new work before they put me upon the back of a horse which threw me to the ground almost as soon as I had reached his back. It hurt me a little, but that was not the worst of it, for when I got up there was a man standing near with a switch in hand, and he immediately began to beat me. Although I was a very bad boy, this was the first time I had been whipped by anyone except father and mother, so I cried out in a tone of voice as if I would say, this is the first and last whipping you will give me when father gets hold of you.

When I had got away from him I ran to father with all my might, but soon found my expectation blasted, as father very coolly said to me, "Go back to your work and be a good boy, for I cannot do anything for you." But that did not satisfy me, so on I went to mother with my complaint and she came out to the man who had whipped me; he was a groom, a white man master had hired to train the horses. Mother and he began to talk, then he took a whip and started for her, and she ran from him, talking all the time. I ran back and forth between mother and him until he stopped beating her. After the fight between the groom and mother, he took me back to the stable yard and gave me a severe flogging. And, although mother failed to help me at first, still I had faith that when he had taken me back to the stable yard, and commenced whipping me, she would come and stop him, but I looked in vain, for she did not come.

Then the idea first came to me that I, with my dear father and mother and the rest of my fellow Negroes, were doomed to cruel treatment through life, and was defenseless. But when I found that father and mother could not save me from punishment, as they themselves had to submit to the same treatment, I concluded to appeal to the sympathy of the groom, who seemed to have full control over me; but my pitiful cries never touched his sympathy….

One day, about two weeks after Boney young [the white man who trained horses for Col. Singleton] and mother had the conflict, he called me to him….When I got to him he said, "Go and bring me the switch, sir." I answered, "yes, sir," and off I went and brought him one…[and] he gave me a first- class flogging….

When I went home to father and mother, I said to them, "Mr. Young is whipping me too much now, I shall not stand it, I shall fight him." Father said to me, "You must not do that, because if you do he will say that your mother and I advised you to do it, and it will make it hard for your mother and me, as well as for yourself. You must do as I told you, my son: do your work the best you can, and do not say anything." I said to father, "But I don’t know what I have done that he should whip me; he does not tell me what wrong I have done, he simply calls me to him and whips me when he gets ready." Father said, "I can do nothing more than to pray to the Lord to hasten the time when these things shall be done away; that is all I can do…." 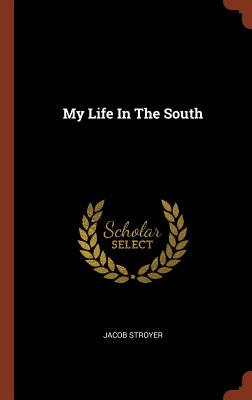 My Life In The South