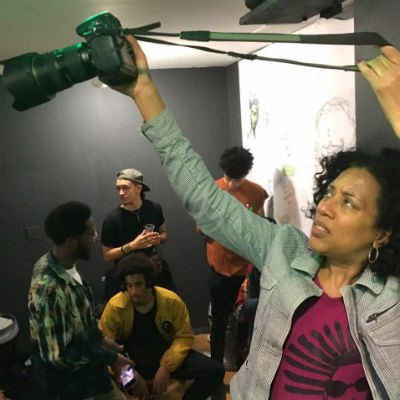 Marcia E. Wilson is a British-born prolific and accomplished photographer who has documented hundreds of poets and writers of the African Diaspora, including Walter Mosley. Since 1995, Marcia has also documented a wide variety of literary events in New York City for leading print and digital platforms. Her work has appeared in the New York Times, Boston Globe, Vibe Magazine, LA Weekly, Jet Magazine, Caribbean Times, Publishers Weekly, QBR, Mosaic Magazine, here on AALBC.com, and among others places. A collection of the images has also been exhibited at the National Black Writers Conference, Medgar Evers College, New Haven Public Library, and Flatbush Public Library.

Her work can be found all throughout AALBC.com, as she helps us chronicle the Black literary experience. She is the official photographer of our popular Black Pack Parties and AALBC.com showcased her earlier work in the Dripping Ink exhibition over a year.