Sarah E. Farro was born in 1859 in Illinois to parents who moved to Chicago from the South. She had two younger sisters, and her race is given as “black” on the 1880 census.

Her novel, True Love: A Story of English Domestic Life, was published in 1891 by the Chicago publishing house Donohue & Henneberry. It was one of 58 books by Illinois women writers exhibited at the World’s Columbian Exhibition (World’s Fair) in 1893. Newspapers in the U.K. and the U.S. heralded the book. Toward the end of her life, in 1937, Farro was feted at a celebration of Chicago’s “outstanding race pioneers.” Apparently, she never wrote another novel.

True Love disappeared from the historical record, and for decades historians recognized only three other 19th-century novels written and published by African-Americans1.

One other, The Bondswoman’s Narrative,was recently found in manuscript and published, even though the author, Hannah Crafts, is only circumstantially (although convincingly) identified. With my discovery, Farro becomes only the second known African-American woman novelist published in the 19th century. And she now joins William Wells Brown, Frances Harper, Harriet E. Wilson, and Frank J. Webb as the only African-American published novelists in the entire century. Read the rest of Farro’s story at the The Conversation US 2 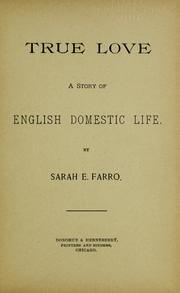