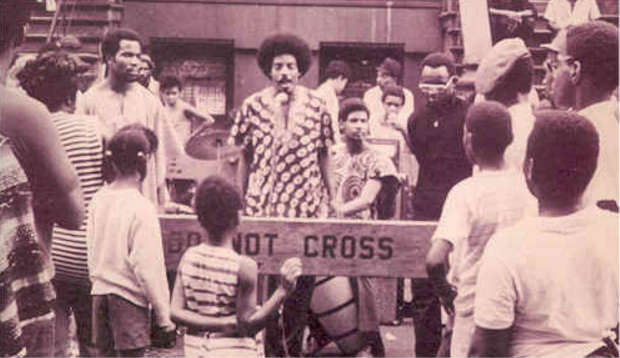 "The Last Poets are the seminal street poets,
whose respect has only grown as their genre's time had come."
- Don Williams Music Group, Inc.

"On May 16, 1969 -- Malcolm X's birthday -- they officially formed The Last Poets, adopting the name from the work of South African Little Willie Copaseely, who declared the era to be the last age of poets before the complete takeover of guns. After a performance on a local televison program, the group was signed by jazz producer Alan Douglas, who helmed their eye-opening eponymous debut LP in 1970. A collection condemning both white oppression ("White Man's Got a God Complex") and black stasis ("Niggas Are Scared of Revolution"), The Last Poets reached the U.S. Top 10 album charts, but before the group could mount a tour, Oyewole was sentenced to 14 years in prison after being found guilty of robbery, and was replaced by percussionist Nilajah.

Above excerpted from material written by Jason Ankeny, All-Music Guide 1999.

Read an Article: The Last Poets: Still On a Mission by DuEwa M. Frazier

On A Mission: Selected Poems and a History of the Last Poets
Click to order via Amazon

The Last Poets are enjoying a resurgence of popularity in the 1990s. They participated in the 1994 Lollapalooza tour; performed in John Singleton's "Poetic Justice", and recently released a new CD called Holy Terror. But who exactly are these renowned forefathers of rap music? And how have they inspired a new generation of performance poets to be more profound than profane? ON A MISSION: Selected Poems and A History of The Last Poets, an affecting combination of memoir and poetry, tells us for the first time.

My people are Black, beige, yellow
Brown and beautiful
A garden of life
with a love as sweet as scuppernong wine
growing in muddy waters
making brown babies with
pink feet and quick minds
My people warm sometimes hot
always cool always together
My people let's be together
understand that we've lived together
understand that we've died together
understand My brother that I've
smelled your piss in my hallway
and it smell just like mine
understand that I love your woman
my sister and her rare beauty
is reason enough for a revolution
yes sister my honest sister
I have had ugly moments with you
but you are the only beauty I've ever known
Yes sister my honest sister
you are the joy in my smile
you are the reality of my dreams
you are the only sister I have
and I need you
I need you to feed the children
of our race
I need you to feed the lovers of our race
I need you to be the summer of my winters
I need you because
you are the natural life in the living
at night there is a moon
to make the Blackness be felt
I am that Blackness
filling up the world
with My soul
and the world knows me
You are that moon
my moon Goddess shining down light
on my Black face
that fills the universe
My moon I am your sun
and I shall take this peace
of light and build a world
for you my sister
Sometimes the waters are rough
and the hungry tide swallows the shore
washing away all memories
of children's footsteps
playing in the sand
where is the world I promised my son?
must he push back the tide
and build the world
that I have rapped about
Am I so godly until I forget
what a man is?
Am I so right until
there is no room for patience
My brother Oh in brother
father of a son
father of a warrior
My brother the sun
My brother the warrior
Be the beginning and the end
for my sister
Be the revolution for our world
turn yourself into yourself
and then onto this disordered world
and arrange the laughter for joy
the tears for sorrow
Turn purple pants, alligator shoes
leather jackets, brown boots
polka dot ties, silk suits,
Turn miniskirts, false eyelashes,
red wigs, afro wigs, Easter bonnets,
bellbottoms turn this confusion
into Unity Unity
so that the sun will follow
our foot steps in the day
so that the moon will glow
in our living rooms at night
so that food, clothing, and shelter
will be free
because we are born free
to have the world as our playground
My people.

"My People" was then, and still is, one of my favorite poems. I feel I have covered the strength, the tenderness, the glory, the truth as well as an ideology that we as a people should work toward."
—Abiodun Oyewole