Dr. Tracy Snipe is an Associate Professor in the School of Public and International Affairs at Wright State University where he teaches Politics and Film, Black Women and Politics, French Politics and has co-led several civil rights pilgrimages. He has published in The ANNALS of the American Academy of Political and Social Science and lectured nationally with Sarah Collins Rudolph, Janie Collins Simpkins, and Junie Collins Williams. He is now writing Saving the Best Wine for Last: Remembrances of the 16th Street Church Bombing, along with Williams.

Mrs. Sarah Collins Rudolph was the “Fifth Little Girl” inside the lounge when a bomb detonated at the 16th Street Church. She valiantly tried to rescue her sister Addie, and decades later would receive the Harmony Award from the Congress of Racial Equality for demonstrating bravery. The Birmingham native is married to George C. Rudolph. From the stages of the Madame Walker Theatre Center in Indianapolis, IN, to Philadelphia’s Independence Hall, the civil rights icon shares her views on forgiveness, reconciliation, and racial justice. 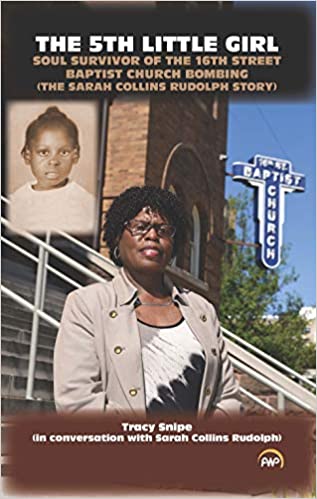