During the late 1990s Rhoden began to write a book outlining his theory about institutionalized racism in sports. After years of research and study of sports history, he published Forty Million Dollar Slaves: The Rise, Fall, and Redemption of the Black Athlete in 2006. In the book Rhoden traced the history of African Americans in U.S. athletics, beginning with the story of Tom Molineaux, a black prizefighter who earned his freedom from slavery by winning a boxing match. Rhoden described how blacks had excelled at a number of sports but had been kept from gaining control of their careers by the actions of powerful white men. Even in sports not commonly associated with black athletes, such as professional cycling and horse racing, skilled African Americans had achieved winning records, only to be prevented from ultimate success by the formation of exclusive white organizations, such as the Jockey Club.

Rhoden continued his analysis into modern athletics, where the high salaries paid to many African-American professional athletes create the impression of power and control. However, Rhoden points to two facts that ensure that a white-controlled racist system remains in charge of professional sports. One is that, just as in the early days of U.S. athletic competition, almost all team owners and sports commissioners are white. The other is that too often wealthy black athletes become spokespeople for sporting goods products, but they do not use their power and influence to work for positive change for African Americans. Rhoden suggested that African Americans needed to take a more unified approach when confronting segregation. For example, when professional baseball first became integrated during the late 1940s, Rhoden believed that, instead of struggling for the acceptance of a handful of black players into major league baseball, supporters of black athletes should have worked to introduce a black-owned team into the league.

Rhoden’s book dropped a bombshell of controversy into the world of sports. Though some white readers disagreed loudly with his criticisms, many others found his ideas meaningful and convincing. Rhoden had succeeded in bringing the topic of racism in sports into the arena of public discussion. 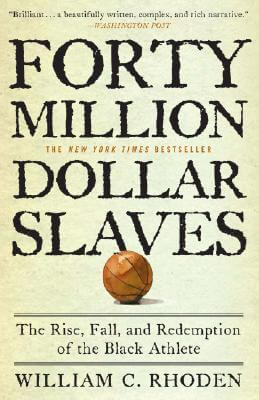