Zanele Muholi was born July 19, 1972 in Umlazi, Durban, South Africa. Zanele is a visual activist and photographer, cofounder of the Forum for the Empowerment of Women, and founder of Inkanyiso, a forum for queer and visual media. Muholi has won numerous awards for their work, including the ICP Infinity Award for Documentary and Photojournalism (2016); the Fine Prize for an emerging artist at the 2013 Carnegie International; a Prince Claus Award (2013); and both the Casa Africa award for best female photographer and a Foundation Blachère award at Les Rencontres de Bamako biennial of African photography (2009). Their Faces and Phases series was shown at dOCUMENTA (13) and the 55th Venice Biennale and was shortlisted for the Deutsche Börse Photography Prize in 2015.

Muholi is an honorary professor at the University of the Arts Bremen, Germany. They are represented by Stevenson Gallery, Johannesburg, and Yancey Richardson Gallery, New York.

Zanele Muholi’s work is described in The Poetics of Difference: Queer Feminist Forms in the African Diaspora by Mecca Jamilah Sullivan 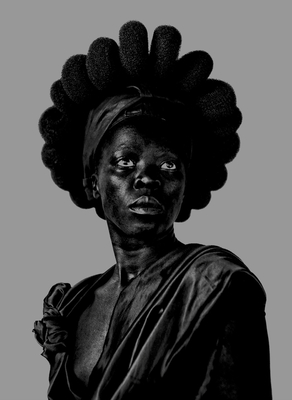