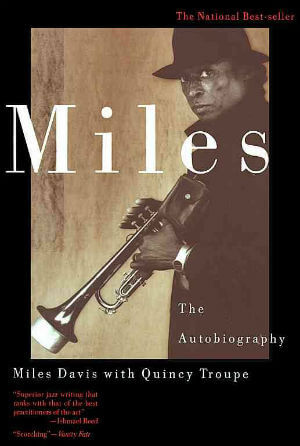 Miles: The Autobiography
by Miles Davis and Quincy Troupe

Read a Description of Miles: The Autobiography

Book Description:
For more than forty years Miles Davis has been in the front rank of American music. Universally acclaimed as a musical genius, Miles is one of the most important and influential musicians in the world. The subject of several biographies, now Miles speaks out himself about his extraordinary life."Miles: The Autobiography, " like Miles himself, holds nothing back. For the first time Miles talks about his five-year silence. He speaks frankly and openly about his drug problem and how he overcame it. He condemns the racism he has encountered in the music business and in American society generally. And he discusses the women in his life. But above all, Miles talks about music and musicians, including the legends he has played with over the years: Bird, Dizzy, Monk, Trane, Mingus, and many others.The man who has given us some of the most exciting music of the past few decades has now given us a compelling and fascinating autobiography, featuring a concise discography and thirty-two pages of photographs.