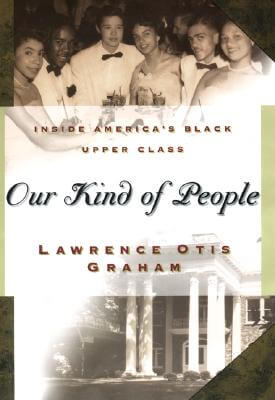 Our Kind of People: Inside America’s Black Upper Class
by Lawrence Otis Graham

Read Our Review of Our Kind of People: Inside America’s Black Upper Class

Hardcover Description:
Debutante cotillions. Arranged marriages. Summer trips to Martha’s Vineyard. All-black boarding schools. Memberships in the Links, Deltas, Boulé, or Jack and Jill. Million-dollar homes. An obsession with good hair, light complexions, top credentials, and colleges like Howard, Spelman, and Harvard… This is the world of the black upper classan exclusive, mostly hidden group that lives awkwardly between white America and mainstream black America. Our Kind of People is the first book written about the insular world of the black upper class by a member of this hard-to-penetrate group. A conservative network of families dating back to the first black millionaires of the 1880s, the black elite has developed its own rules for membership and for maintaining a place in a world that is unaware of its vast contributions. Through six years of interviews with more than three hundred prominent families and individuals, journalist and commentator Lawrence Otis Graham weaves together the revealing stories and fascinating experiences of upper-class blacks who grew up with privilege and power. Best known for his provocative New York magazine exposé of elite golf clubs, when he left his law firm and went undercover as a busboy at an all-white Connecticut country club, Graham now turns his attention to the black elite. Sometimes gossipy and always poignant, Graham visits and profiles upper-class families and institutions in New York, Chicago, Atlanta, Washington, D.C., Philadelphia, Detroit, Nashville, Memphis, Los Angeles, and New Orleansalways revealing who passes the "brown paper bag and ruler test" and who doesn’t. With photographs and stories, the author takes us to the mansions they built in the 1880s, as well as to black-tie debutante cotillions and dinners hosted by the "best" families and social groups. He visits families that trace their lineage to prominent whites, profiles major politicians, and interviews guests who attended a famous $60,000 wedding held in 1923 by New York’s wealthiest black family. He takes us on a limousine ride with the richest black man in America and introduces us to socialites who are adept at screening celebrities, Baptists, and "new money" blacks out of their circles. Graham reveals the history of the black summer camps and boarding schools that opened in the 1920s, and the black insurance firms and banks that were founded in the 1930s. Our Kind of People even takes us into the Wall Street offices and Fifth Avenue apartments of today’s millionaire black bankers and entrepreneur, who make up the new wave of elite African Americans. Weaving together these stories with his own first-person narrativeone that tells of his childhood experiences in black elite social clubs and of wealthy family friends who "passed" for white in order to gain access to better jobsGraham reveals a group that has been simultaneously heroic, snobbish, generous, and ambitious. Both poignant and inspirational, Our Kind of People gives readers a firsthand look into a very private community that has played a major role in American history.

Books similiar to Our Kind of People: Inside America’s Black Upper Class may be found in the categories below: