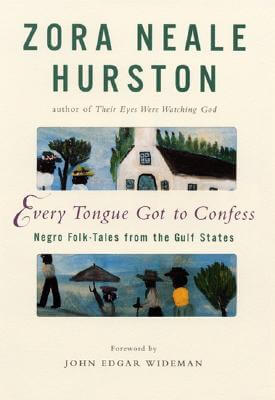 Every Tongue Got to Confess: Negro Folk-Tales from the Gulf States
by Zora Neale Hurston

Read Our Review of Every Tongue Got to Confess: Negro Folk-Tales from the Gulf States

Hardcover Description:
"Imagine the situations in which these speech acts occur. Recall a front stoop, juke joint, funeral, wedding, barbershop, kitchen: the music, noise, communal energy, and release. Dream. Participate the way you do when you allow a song to transport you, all kinds of songs, from hip-hop rap to Bach to Monk, each bearing its different history of sounds and silences."— From the Foreword by John Edgar WidemanAfrican-American folklore was Zora Neale Hurston’s first love. Collected in the late 1920s, Every Tongue Got to Confess is the third volume of folk-tales from the celebrated author of Their Eyes Were Watching God. It is published here for the first time.These hilarious, bittersweet, often saucy folk-tales — some of which date back to the Civil War — provide a fascinating, verdant slice of African-American life in the rural South at the turn of the twentieth century. Arranged according to subject — from God Tales, Preacher Tales, and Devil Tales to Heaven Tales, White-Folk Tales, and Mistaken Identity Tales — they reveal attitudes about slavery, faith, race relations, family, and romance that have been passed on for generations. They capture the heart and soul of the vital, independent, and creative community that so inspired Zora Neale Hurston.In the foreword, author John Edgar Wideman discusses the impact of Hurston’s pioneering effort to preserve the African-American oral tradition and shows readers how to read these folk tales in the historical and literary context that has — and has not — changed over the years. And in the introduction, Hurston scholar Carla Kaplan explains how these folk-tales were collected, lost, and found, and examines their profound significance today.In Every Tongue Got to Confess, Zora Neale Hurston records, with uncanny precision, the voices of ordinary people and pays tribute to the richness of Black vernacular — its crisp self-awareness, singular wit, and improvisational wordplay. These folk-tales reflect the joys and sorrows of the African-American experience, celebrate the redemptive power of storytelling, and showcase the continuous presence in America of an Africanized language that flourishes to this day.

Books similiar to Every Tongue Got to Confess: Negro Folk-Tales from the Gulf States may be found in the categories below: