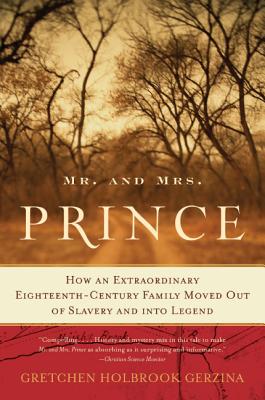 Mr. and Mrs. Prince: How an Extraordinary Eighteenth-Century Family Moved Out of Slavery and into Legend
by Gretchen Holbrook Gerzina

Book Description:
Merging comprehensive research and grand storytelling, Mr. and Mrs. Prince reveals the true story of a remarkable pre-Civil War African-American family, as well as the challenges that faced African-Americans who lived in the North versus the slaves who lived in the South. Lucy Terry, a devoted wife and mother, was the first known African-American poet and Abijah Prince, her husband, was a veteran of the French and Indian wars and an entrepreneur. Together they pursued what would become the cornerstone of the American dream—having a family and owning property where they could live, grow, and prosper. Owning land in both Vermont and Massachusetts, they were well on their way to settling in when bigoted neighbors tried to run them off. Rather than fleeing, they asserted their rights, as they would do many times, in court. Here is a story that not only demonstrates the contours of slavery in New England but also unravels the most complete history of a pre-Civil War black family known to exist. Illuminating and inspiring, Mr. and Mrs. Prince uncovers the lives of those who could have been forgotten and brings to light a history that has intrigued but eluded many until now.

More books like Mr. and Mrs. Prince: How an Extraordinary Eighteenth-Century Family Moved Out of Slavery and into Legend may be found by selecting the categories below:

Tell us what do you think about Mr. and Mrs. Prince: How an Extraordinary Eighteenth-Century Family Moved Out of Slavery and into Legend.