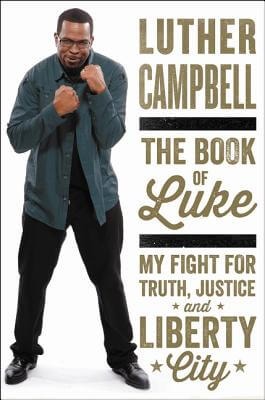 The Book of Luke: My Fight for Truth, Justice, and Liberty City
by Luther Campbell

Book Description:
The raw and powerful true story of how one man invented Southern Hip-Hop, saved the First Amendment, and became a role model for his disenfranchised Miami neighborhood—living proof that one person can make a difference in the world.A rap artist, wealthy musical entrepreneur, high school coach, and involved, active citizen—Luther Campbell’s life is a reflection of modern America. His is a tale that touches on the most pressing issues of our time: sex, creativity versus the corporate bottom line, conservative values and artistic freedom, personal rights, the gangster mentality of music companies, the rise of entrepreneurship, and the power—and responsibilities—of individuals to care for their neighborhoods, their country, and the people around them.Born in Miami’s notorious Liberty City neighborhood, Campbell saw firsthand poverty, despair, and crime. He also discovered the gift of transformation we all possess—knowledge that has made him a passionate fighter willing to take on the most powerful forces in the name of justice and what’s right. His rap group 2 Live Crew and successful independent label made him a superstar and a multi-millionaire—and the center of enormous controversy.The “King of Dirty Rap” who helped pioneer the worldwide phenomenon known as the Miami Bass sound infuriated the conservative mainstream and became Public Enemy #1 when hip hop crossed the color line into white America. Campbell spent over a million dollars of his own money fighting cops and prosecutors all the way to the Supreme Court to protect his—and every other artist’s—right to free speech, setting landmark legal precedents that continue to shape the entertainment industry today.Twenty years later, Campbell uses his fame and fortune to give back to the community, saving young men from the street corners and fighting for his people. Passionate, transformative, and inspiring, The Book of Luke is his story—a living testament to hope and change.

More books like The Book of Luke: My Fight for Truth, Justice, and Liberty City may be found by selecting the categories below:

Tell us what do you think about The Book of Luke: My Fight for Truth, Justice, and Liberty City.