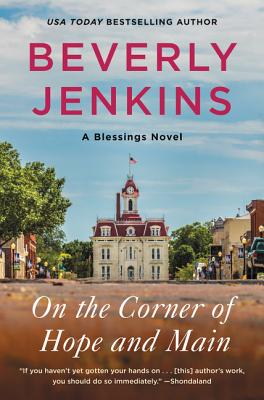 On the Corner of Hope and Main: A Blessings Novel
by Beverly Jenkins

"If you haven’t yet gotten your hands on [this] author’s work, you should do so immediately."—Shondaland

Trent July has been the mayor of this historic town for the past four years, but now he’s ready to let someone else take up the mantle. Barrett Payne, a former Marine, decides he wants the job. So does his wife Sheila who thinks it’s high time Henry Adams has a woman for mayor. Their teenage son, Preston, finds himself caught in the middle as the rest of the town has opinions on who would be the better candidate.

And of course that’s not the only drama, as recovering alcoholic Malachi "Mal" July continues to make reparations to the people he’s betrayed, especially his lady love Bernadine. Is she finally ready to forgive him and let the past go?

As the residents of Henry Adams have learned, life will throw obstacles their way, but it’s how they come together and rise above these challenges that keep the bonds of their close-knit community strong.

Books similiar to On the Corner of Hope and Main: A Blessings Novel may be found in the categories below: