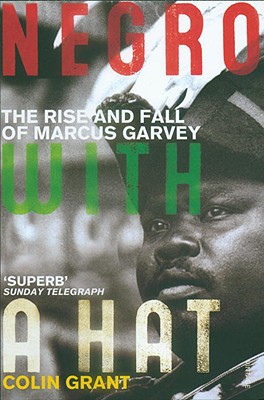 Negro With A Hat: The Rise And Fall Of Marcus Garvey
by Colin Grant

Read Our Review of Negro With A Hat: The Rise And Fall Of Marcus Garvey

At one time during the first half of the twentieth century, Marcus Garvey was the most famous black man on the planet. Hailed as both the ‘black Moses’ and merely ‘a Negro with a hat’, he masterminded the first International Convention of the Negro Peoples of the World, began the Universal Negro Improvement Association and captivated audiences with his powerful speeches and audacious ‘Back to Africa’ programme. But he was to end his life in penury, ignominy and friendless exile, after serving hail time in both the US and Jamaica.

With masterful skill, wit and compassion, Colin Grant chronicles Garvey’s extraordinary life, the failed business ventures, his misguided negotiations with the Ku Klux Klan, the two wives and the premature obituaries that contributed to his lonely, tragic death. This is the dramatic cautionary tale of a man who articulated the submerged thoughts of an awakening people.

More books like Negro With A Hat: The Rise And Fall Of Marcus Garvey may be found by selecting the categories below: