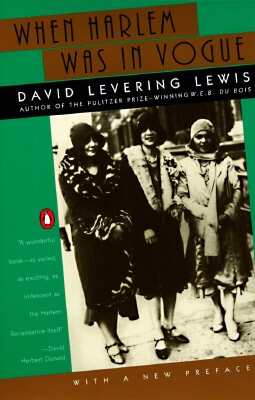 When Harlem Was In Vogue
by David Levering Lewis

"A major study…one that thorougly interweaves the philosophies and fads, the people and movements that combined to give a small segment of Afro America a brief place in the sun."—The New York Times Book Review.

This focuses on the creation and manipulation of an arts and belles-lettres bulture by a tiny African-American elite.

The decade and a half that followed World War I was a time of tremendous optimism in Harlem. It was a time when Langston Hughes, Eubie Blake, Marcus Garvey, Zora Neale Hurston, Paul Robeson, and countless others made their indelible mark on the landscape of American culture. David Levering Lewis makes us feel the excitment of the times as he recaptures the intoxicating hope that black Americans could now create important art - and so at last compel the nation to recognize their equality. In his new preface, the author reconsiders the Harlem Renaissance in light of criticism surrounding the exploitation of the black community. Table of Contents

More books like When Harlem Was In Vogue may be found by selecting the categories below: