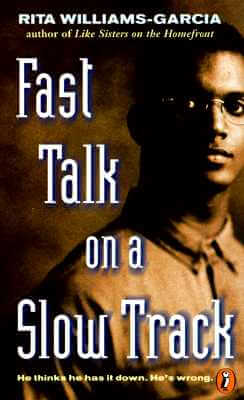 Fast Talk On A Slow Track
by Rita Williams-Garcia

Book Description:
Denzel Watson is a fast talker with a system, and it’s made him valedictorian. But when he goes to a summer program at Princeton, he takes a fall. How can he tell his proud family that he won’t be able to cut it in the Ivy League? Instead, he spends the rest of the summer selling candy, up against "Top Man" Mello, a drop-out with a police record. For the first time, Denzel is forced to take a hard look at himself — and how much further he could fall."Williams-Garcia confronts some crucial issues that are generally ignored in YA fiction: issues of class and race, friendship and competition, identity and failure." — Booklist"Teens everywhere will be able to identify and commiserate with Denzel." School Library Journal, starred review

More books like Fast Talk On A Slow Track may be found by selecting the categories below:

Tell us what do you think about Fast Talk On A Slow Track.