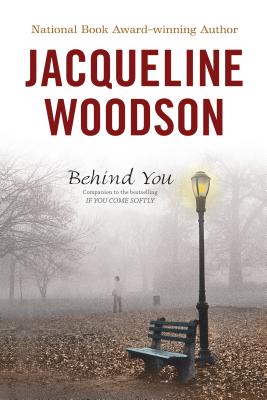 Behind You
by Jacqueline Woodson

You are so light you move with the wind and the snow. . . . And it lifts you up-over a world of sadness and anger and fear. Over a world of first kisses and hands touching and someone you’re falling in love with. She’s there now. Right there. . . .Miah and Ellie were in love. Even though Miah was black and Ellie was white, they made sense together. Then Miah was killed. This was the ending.And it was the beginning of grief for the many people who loved Miah. Now his mother has stopped trying, his friends are lost and Ellie doesn’t know how to move on. And there is Miah, watching all of this—unable to let go.How do we go on after losing someone we love? This is the question the living and the dead are asking.With the help of each other, the living will come together. Miah will sit beside them. They will feel Miah in the wind, see him in the light, hear him in their music. And Miah will watch over them, until he is sure each of those he loved is all right.This beautiful sequel to Jacqueline Woodson’s If You Come Softly explores the experiences of those left behind after tragedy. It is a novel in which through hope, understanding and love, healing begins.

More books like Behind You may be found by selecting the categories below: