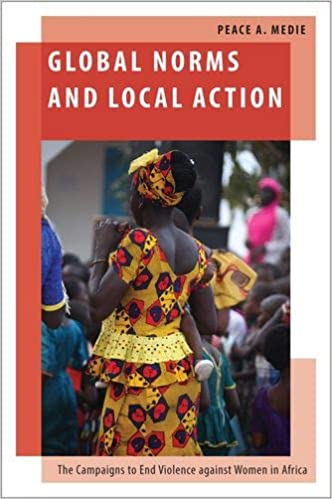 Global Norms and Local Action: The Campaigns to End Violence Against Women in Africa
by Peace Adzo Medie

Hardcover Description:
Violence against women has been a focus of transnational advocacy networks since the early 1980s, and the United Nations has, in intervening years, passed a series of resolutions to condemn, prevent, investigate, and punish this violence. Member states have committed to implementing this agenda. Yet, despite this buy-in at the global level, implementation at the domestic level remains uneven. Scholars have found that states are more likely to translate global standards into national laws when pressured by women’s movements and international organizations. However, a dearth of research on the implementation at the national and street-levels of these international women’s rights norms hampers an understanding of what happens after states pass laws. In Africa, where most states have not prioritized the prevention of violence against women, and the majority of perpetrators act with impunity, there is a major implementation gap. This gap is acute in some post-conflict countries on the continent. Thus, despite the presence of laws on various forms of violence against women in most African countries, justice remains inaccessible to most victims. In Global Norms and Local Action, Peace A. Medie studies the domestic implementation of international norms by examining how and why two post-conflict states in Africa, Liberia and Cóte d’Ivoire, have differed in their responses to rape and domestic violence. Specifically, she looks at the roles of the United Nations and women’s movements in the establishment of specialized criminal justice sector agencies, and the referral of cases for prosecution. She argues that variation in implementation in Liberia and Cóte d’Ivoire can be explained by the levels of international and domestic pressures that states face and by the favorability of domestic political and institutional conditions. Medie’s study is based on interviews with over 300 policymakers, bureaucrats, staff at the UN and NGOs, police officers, and survivors of domestic violence and rape an unprecedented depth of research into women’s rights and gender violence norm implementation in post-conflict countries. Furthermore, through her interviews with survivors of violence, Medie explains not only how states implement anti-rape and anti-domestic violence norms, but also how women experience and are affected by these norms. She draws on this research to recommend that states adopt a holistic approach to addressing violence against women.

Books similiar to Global Norms and Local Action: The Campaigns to End Violence Against Women in Africa may be found in the categories below: